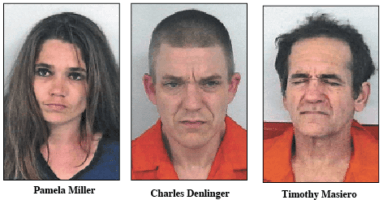 Versailles Town Marshal Joe Mann recently took three individuals into custody – two on warrants out of Dearborn County. When he talked with Pamela Danielle Miller, 32, she said she had drugs in her bra or purse, but couldn’t remember exactly where. When Miller was being booked at the jail she said she had Fentanyl, but didn’t know how much. This was found in her purse, according to court records.

When Miller was interviewed at the jail she told police that she had “gone to the city and brought back 36 grams of meth” and shared it with several people at the apartment complex (Tanglewood Apartments in Versailles).

Miller told police she had just gotten out of rehab the first of May and had been dealing drugs in Ripley and Dearborn counties. She told police that people came from “everywhere” to see her. She has been charged with Possession of a Narcotic Drug at this time.

Also taken into custody was Charles Edward Denlinger, 45, who was booked on Possession of Methamphetamine and Unlawful Possession of a Syringe on or about June 9. He was also arrested on a warrant out of Dearborn County.

During his arrest, Denlinger told police he had some syringes in his pants pocket and might still have a little meth on him. He was found to have syringes on him along with a small plastic container with crystalline rock-like substance inside. The suspect told police it was meth. He had numerous needle marks running up and down both arms, according to the Affidavit of Probable Cause.

The third person in the trio taken to jail is Timothy Masiero, 54 of Versailles. He was taken into custody and charged with Possession of Methamphetamine, Maintaining a Common Nuisance, Possession of Marijuana and Possession of Paraphernalia.

Police learned that Masiero’s apartment could have drugs inside and after obtaining a search warrant they approached his apartment. Masiero was cooperative with police and told them he smoke Methamphetamine daily in his apartment. Officers found a Meth Bong that Masiero said he made from an old glass bottle. He said he put Mountain Dew in it and liked to use the bong because it “made the meth easier to smoke,” according to court records.

Masiero told police the meth was acquired by different people pitching in together to get enough money to make the purchase so they could all get high. He said he usually gets about two grams at a time and uses his digital scales to weight it all out so he would know exactly how much he was actually getting.

In a small rural town such as Versailles, it is important that police keep an eye out for any type of drug dealing and/or use. Marshal Mann noted that he and Deputy Marshal Cody Buchanan will continue to wage war on drugs to make the town safe for residents.