4 charged when drug investigation goes down 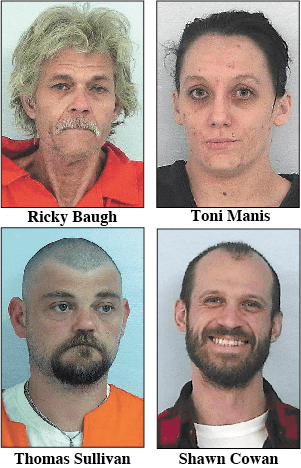 Ricky Baugh, Thomas Dean Sullivan, Shawn Cowan and Toni Manis have all been charged after police conducted a drug investigation at an apartment on Tyson Street in Versailles.

Police discovered evidence of drug dealing that included a quantity of methamphetamine and drug paraphernalia such as baggies, smoking devices, and hypodermic syringes.

The investigation was conducted by the Versailles Police Department working with the Indiana State Police.

Prosecuting Attorney Ric Hertel noted there has been an uptick in criminal filings since the start of the new year, especially those relating to substance use/abuse. “The collaboration between law enforcement agencieslike what took place here, is the key, along with citizens willing to get involved by contacting authorities to reduce the impact on illegal substances in our community,” Hertel concluded.