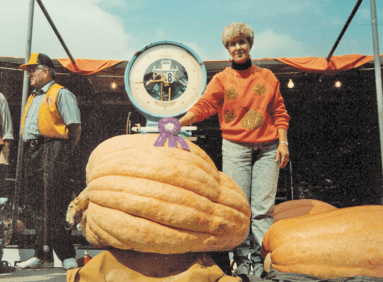 Several can tell you about General John Hunt Morgan’s infamous ride through the town square in 1863, some can tell you about the legends of Gordon’s Leap and the Hanging Tree, but just about everybody who has at one point in time lived inside our small town can tell you something about the Versailles Pumpkin Show. It’s just that big of a deal.

So when the 118th annual Versailles Pumpkin Show was canceled in late July due to the fallout of COVID-19, such an announcement brought about much shock throughout. After all, Pumpkin Show has generated thousands upon thousands of visitors and a lifetime of memories for many, earning itself the distinction of being one of the longest running festivals in the state and priding itself as being a staple of Versailles. However, this is not the first time the fall extravaganza has been forced to cancel.

World War II brought about the first cancellation of the Pumpkin Show in 1942, a decision that was made by the Versailles Pumpkin Show Committee, a group of local citizens who headed up planning the festival. The war efforts required the majority of the town to increase its workload while rationing and shortages perhaps played a key role in the decision to cancel. Not only were local grocery stores forced to ration products to consumers but a country-wide sugar shortage also crippled several, a trend that continued through the end of the war.

Pumpkin Show remained non-existent through 1945, despite September 2 of that year officially recognizing Japan’s surrender and the end of the war. Many locals were hopeful for Pumpkin Show’s return that October when the festival used to be centered around the Columbus Day holiday but the Pumpkin Show Committee stayed firm on the event being a no-go, putting a sour ending on the committee’s reign over the town’s biggest attraction.

In the meantime, the town of Versailles had plenty on its plate in September and October of 1945. Ripley County announced its final war fund drive as the county was required to meet its quota of $11,022 and veterans still serving or coming home were being heavily recruited to join Versailles American Legion Post #173 after Congress amended a law that allowed every man and woman who fought in World War II to be eligible for legion membership. A school bus ban that had been in place during the war was also lifted that fall, allowing for buses to once again transport players and fans to athletic events. On September 30, President Harry Truman signed a bill returning the nation to standard time and officially putting an end to war time.

One of the biggest local headlines during those two months away from the war was the proposal that was brought to a Versailles town meeting, proposing the construction of what would evolve into Tyson Auditorium. A meeting was then scheduled for October 12 at the Tyson Library to hear from architect Erb Hanson of Connersville and discuss the building of the auditorium and gymnasium for the Versailles schools. The proposal included the desire for the gym to seat between 2500 and 3000 and the projected start date on the project would start in the spring of 1946.

Pumpkin Show returned on October 11 and 12 of 1946 and it would be the first one headed up by the Versailles Lions Club who was still an organization in its infancy at the time, having formed in town during World War II. Thousands were expected for the Friday and Saturday event that included a brand new $55 grand prize for the biggest pumpkin, the Saturday parade and a Saturday night Pumpkin Show dance featuring Don Phillips and his “Society’s Favorite” orchestra. Other events included a Friday night street dance, a pet contest, exhibits and a variety of entertainment acts that followed Saturday morning’s parade.

Times have changed, the schedule of events has certainly evolved, but one thing for sure that has not changed in the last 75 years is that desire for Pumpkin Show to return again. We anxiously await amid the most uncertain of times, much like the citizens before us in 1945, but know there will come a day when the sights and sounds of the Versailles Pumpkin Show will fill our town once more.