90% of drug use in Ripley County is meth 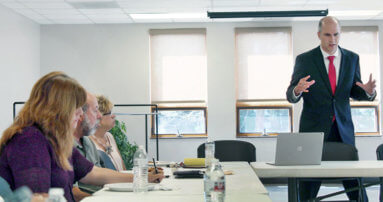 
Chief Deputy Prosecutor Shane Tucker, pictured standing, gave an overview of what the prosecutor’s office does on an ongoing basis at the August meeting of the Ripley County Drug Awareness Coalition held at the Osgood Community Center. He noted that drugs are somehow involved in the greatest percentage of their cases.

Keeping the community safe is a high priority of the Ripley County Prosecutor’s Office, according to Chief Deputy Prosecutor Shane Tucker.

Tucker spoke to the Ripley County Drug Awareness Coalition on Thursday, August 15 and gave highlights of what their office is about. He also thanked the coalition for grant money they have put to good use.

Operating under the philosophy of keeping the community safe, Tucker noted that they use that lens when addressing every case that comes before them. “It could be from stolen candy from a store to a homicide case,” he noted.

But one of the most seen cases before the four prosecutors at this time involves drugs, and more specifically, methamphetamine. Tucker noted that there are different levels when it comes to this issue: 1) low level users, 2) those who have been in the system and have a lengthy history of drug use and 3) dealers. At times, those three can change and are sometimes interchangeable, as most dealers are also users.

“We are a firm believer in treatment,” he told those gathered at the Osgood Community Center. He said some people can and do respond to treatment, but most meth users only get deeper into the addiction and finally land in jail or die from using.

When you consider that the drug of choice in Ripley County is 90% meth, and more specifically crystal meth, that’s a huge burden for the police, prosecutors, and judges to deal with. It’s more than that. It impacts every life the user touches. “It breaks apart families,” Tucker said.

Tucker noted that drug users and dealers alike used to cook their own meth in homemade labs. While some still do cook meth at home, the majority is streaming into the United States from Mexico. He said they have what they call “super labs” where they are cranking out tons, yes tons, of meth that is sold at a cheap price. A packet of sweet n’ low sugar was compared to one gram of meth, which sells for $25-$30 on the street. These dealers are buying their supplies in bulk. It was noted that the corrupt government in Mexico turns their back on the flow of drugs and the drug cartels are king.

Dealers are bold and usually get their supply from a large city close to Ripley County such as Cincinnati or Dayton, Ohio or Louisville, Kentucky. People who are addicted will do anything to get meth and they can readily find a dealer. “I’m concerned at how young some of the users are,” Tucker noted. The big concern is once they have tried meth, they are hooked. He asked Shannon Schmaltz about those on probation for meth, with Schmaltz saying, “The success rate is just terrible…it’s a hard drug to shake.” Schmaltz is the director of court services for Ripley County and sees the serious problem with meth.

When prosecuting crimes involving drugs, the prosecutor’s office works with the court system and judges. They do not have a goal of “putting everybody in jail” but rather, finding the best solution to the problem at hand, while keeping with their primary goal of community safety. Drugs often cause people to do things they wouldn’t ordinarily do – such as steal from a family member or friend.

Tucker noted that response to how police find drug dealers has changed and it’s for the good. He noted that the Indiana State Police Drug Interdiction Team has partnered with federal officials and worked major thoroughfares to stop the flow of drugs coming into the country and county. He said they have more undercover police gathering information and more “boots on the ground” with the All Crimes Policing Unit. The prosecutor’s office works closely with the Indiana State Police on drug crimes in Ripley County.

Finding those who are transporting drugs oftentimes is through the cell phones they use. As dealers have developed higher technology for their business, so have the police. “The Indiana State Police have made a major impact on Ripley County with their latest efforts to eradicate drug dealers,” Tucker said. But, they know they will never completely take every dealer off the street and their work is cut out for them daily as they work toward making the community safer.

Tucker said drug abuse crosses every barrier and isn’t particularly in low income or high income areas. It is everywhere. He is grateful to the Coalition for their grant money and said they have used it to upgrade technology. He said jurors expect to see prosecution in digital time, which means they have to have presentations in technological ways and terms that are relevant.

Superintendent of Batesville Schools Paul Ketchum also spoke at the luncheon. He was representing CHOICES and said that school safety is a layered effect and building relationships is the first step.

Ketcham said that choices for students are “embedded in their daily routine”. It’s all about what the student chooses and the school staff and administration are working as a unit to make sure the students have leaders that understand their needs.

He said children have real fears about their friends being depressed or having anxiety, or perhaps it’s them that suffer from some type of emotional disparity. He said they are teaching them that it’s ok to tell someone and then the school has someone in place to listen.

Supt. Ketcham also thanked the Coalition for their grant of $3500 saying they are using it in the CHOICES program and in the meantime empowering kids to make good choices.

The summer months have been filled with the Coalition hearing from law enforcement, judicial and the prosecution’s perspective on drugs. The next event will be somewhat more elaborate with it being what the legislative perspective is for the future. This will be held October 17 at 6 p.m. at the Southeastern Indiana REMC, 712 S. Buckeye St., Osgood. October is National Substance Abuse Prevention Month. At that meeting Senator Jean Leising, Representative Randy Frye, Representative Cindy Ziemke, Christopher Creighton and Ethan Lawson from the Governor’s office will be featured speakers. Local business leaders throughout the county will be in attendance as well.

The Ripley County Drug Awareness Coalition moves forward with Kerri Fox as the new administrative director with their goal of preventing and reducing the effects of alcohol, tobacco and drugs in the county. The RCDAC website is https://www.ripleycountydrugawarenesscoalition.com