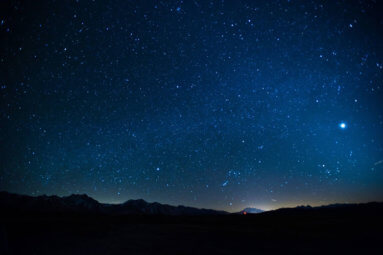 The Versailles Town Board members gave permission for Tyson Library to bring a “star party” to the Versailles Sports Complex on July 5.

Library Director Margaret Marcy, came before the board at their regular meeting Tuesday, April 9 to ask permission to use the complex. She noted that Bryan Simpson of the Cincinnati Astronomical Society will be bringing a group to Versailles, along with several high-powered telescopes, to present a short program and then there will be some star/planet gazing with the members of the astronomical club.

Marcy explained they were getting permission now, so they can begin advertising the event that is sure to draw a crowd of those who enjoy star gazing and astronomy.  Watch for more in this paper closer to the time of the event.

Versailles Volunteer Fire Chief Ben Sieverding was in attendance to give his report for the previous month. The department had 52 calls, one was an assist to Delaware Fire Department concerning a hazmat incident and four structure fires. He noted that seven firefighters have completed their skills testing and will now be taking their final test. He has submitted a grant to help with communications (radios) and reported that all three tornado sirens in the town worked during the recent test.

Kevin Hensley, maintenance supervisor, reported that all was going good at the sewer plant. He noted that construction work throughout the town will begin in the next two weeks (weather permitting), from the grant for the sewer/wastewater project. He reported the big dump truck had been repaired. They are trying to patch the other trucks and make do for now with what they have. Steve Mathes, board president, said, “Unless it’s a safety issue, I think we should wait ‘til we have a clear path to pay for it.” (a new dump truck)

Marshall Joe Mann and Deputy Marshal Eddie Rodriquez were in attendance at the meeting to give updates on police activity for the previous month. They talked about citations for ordinances concerning property with junk etc. They also have been busy with regular patrol policing and paperwork. Marshal Mann submitted paperwork for an upcoming conference he is required to attend.

Four patrons attended the meeting – all had concerns to bring before the board.

Pauline Moeller was concerned about some new construction on a neighboring property, saying she was worried about the proximity to her property and the water run off. She was referred to the County Planning and Zoning Commission, which would be Tad Brinson or Dwight Bauman, who could answer her questions better than the town board members.

Terri Powers with the Ripley County Soccer Club was there to express her concerns over the direction the soccer club was going. The Versailles Sports Complex is leased to the soccer club, with Mathes saying if the soccer club needed the board to meet with them, they would do that. There is two years left on a three-year lease for the club.

The idea of having a billing company take care of the water bills was discussed, but no determination was made at the meeting. The bills that are sent out now have perforation that seems to be getting caught in postal machines, leaving some residents with a partial copy of their bill and sometimes they don’t receive it at all. The board will check further into the situation and said residents may soon see a new look to their water bill.

The Versailles Town Board meets every second Tuesday of the month at the community center on the east side of the square.