April: Month of the Military Child 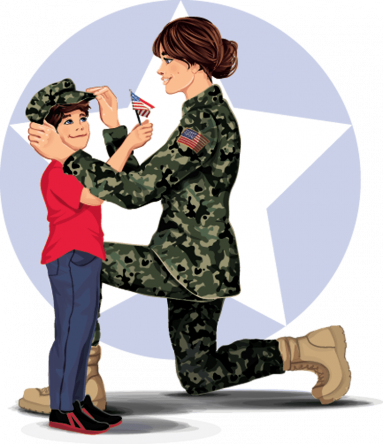 Editor’s Note: With April being designated Month of the Military Child, a three-part series, written by Robert Luken, will appear in this paper. We thank him for being willing to share his experience and promote children of military parents.

When most Americans think about the sacrifices that the members of our nation’s military make on a daily basis, most focus upon the member of the United States Army, Marine Corps, Navy, Coast Guard, Air Force and the recently formed Space Force. Rarely is attention given to the family members of those dedicated service men and women who so proudly serve our nation both in the United States and around the world.

In this and future articles, I will focus upon the military family and especially upon those families who are stationed overseas. My 29 years of experiences with the United States Army as a teacher for the Department of Defense, will I hope, let my readers know, from my personal perspective, what are some of the benefits and challenges that the children of our nation’s military face. I will also present the history and details pertaining to the Department of Defense Dependents Schools (DoDDS) where over 69,000 of our military sponsored children attend school in the United States and around the world.

I can honestly say that I was one of those who failed to recognize the many sacrifices that the military family members make in supporting the military member (sponsor) of the family. That quickly changed in 1985 when I became a teacher at Bamberg American High School, on Warner Barracks, a former German cavalry post, situated in Bamberg, in the German state of Bavaria. I would remain at BAHS until its closure and my retirement in 2014, thus ending a teaching career of 43 years.

When I became a teacher for DoDDS, I knew very little about military life. My only family connection with the military was through my father who had served in the United States Navy during the Second World War and my brother who was a reservist in the Air Force. I had much to learn about the lives that our military members and their families live.

Over the years, the United States Congress has honored the many individuals who have contributed to our country by dedicating a month to honor their contributions, achievements and heritage. For example, February is African History Month, March is National Women’s Month, May is National Military Appreciation Month, and November is American Indian Heritage Month. In 1986, Defense Secretary Caspar Weinberger designated April as the Month of the Military Child. This designation has been the inspiration for me to write about the military family.

One question that I am frequently asked is “how did I become a DoDDS teacher?” The answer is a simple one. “I owe all of the wonderful experiences that I had while teaching at BAHS to one man – Mr. Richard Phebus, who at the time, was my principal at Jac-Cen-Del High School. Mr. Phebus was a retired officer in the United States Army and it was his suggestion that I investigate the possibility of serving my country by applying to become a DoDDS teacher. I will be forever grateful to him.”

When I was interviewed in April of 1985 for an overseas teaching position at one of the many Department of Defense Schools, that were located around the world, I was asked the question: “”Do you consider yourself to be a flexible and adaptable person?” At the time I didn’t realize the significance of that question. It was not long before I learned that flexibility and adaptability for a DoDDS teacher were essential. I later learned that those same characteristics were also very important for the military sponsor and especially for the members of his or her family.

Prior to my interview for a position with DoDDS, I knew absolutely nothing about DoDDS other than what Mr. Phebus had told me. Today, I could have researched the subject by using the Internet, but in 1985 the Internet was an “invention of the future.” Hence, I used the “old fashion method.” I relied on people, not a website, to give me the facts and information that I needed. Who better to do that than my Congressional Representative Lee Hamilton?” Congressman Hamilton provided the needed contact information. My challenge had been successfully overcome.

One of the questions which many have is: “What are the details about DoDDS?” In the next article I will write about its history, the reasons for its establishment and how a DoDDS’s educational experience benefits the military family.