Aunt of murder suspect says he told her he did it 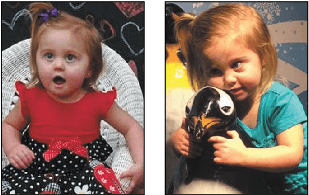 
“It hit him like a ton of bricks...he took care of them and the whole house. He loved them very much.”
-Candice Barker
Great Aunt of defendant

“I killed Desiree.” That statement gave new direction for investigators in the double murder charge that Nickalas Kedrowitz, 17, would face in Ripley County Circuit Court this week. It came when he was riding in a car with his great aunt Candice Barker some time after both of the children had been killed.

Barker said she asked him if he killed the other child who was murdered in this case as well, and he said, “Yes, I had to protect them.”

Kedrowitz has been charged with two Murder charges after Prosecutor Ric Hertel filed the formal charges against him back in 2017 when the murders of two children under the age of three, occurred in the home at 238 Maple Street in Osgood. Kedrowitz was just 13-years-old at the time and lived in the same home as the children with his mother and step-father.

Barker took the witness stand on Tuesday saying the defendant was like a grandson to her. She told that he had confessed to her that he had taken the lives of the two children he has been charged with murdering. She testified that she felt Kedrowitz had four different personalities and one was very bad and capable of murder.

Barker said Kedrowitz told her the fourth personality was “very bad and she didn’t want to see that one.” She went on to say that the defendant told her he held the towel tight against the mouth and nose of the first victim, a little girl, not quite three-years-old. “Her face turned blue,” he admitted, then said he carried her into the living room.

Of the second child that died in the Osgood home just 80 days after this precious girl, Kedrowitz said he used a blanket and purposefully pushed down to make him die. Again, he said he (Kedrowitz) wanted him to be safe. She said he showed her how he pushed down on the baby who hadn’t reached his first birthday yet when his life was taken.

Barker testified that there wasn’t a word to describe how she felt when Kedrowitz told her these things. He further stated he wanted to get up in front of people at church and make a confession. “He did go to the altar to pray about 10-15 minutes,” she testified, and said he told a youth leader.

When Kedrowitz was sent to live with the Barkers, Candice and her husband, Bob, Candice said he thought he was there to do chores. She said he seemed confused about knowing reality from fiction. When she raised her voice at him to go to his room, she testified that he went and hid in the basement and was found later curled up in a fetal position saying, “Don’t hit me, don’t hit me, don’t hit me.” Defense Attorney Lynn Fledderman asked Barker if she thought that was normal behavior, to which Barker said she did not.

Barker said she had taught school for many years and has worked with children who are special needs. She felt Kedrowitz was high-functioning, but lacked verbal skills of someone who was 13-years-old. She said he didn’t sleep well, had night terrors, and would exaggerate things. She said he didn’t realize that the children whose lives he said he took, would never be coming back and would look for the little girl in particular.

“It hit him like a ton of bricks,” she said of when Kedrowitz realized the children wouldn’t ever be coming back. About killing the babies, Barker testified that the defendant never said he didn’t do it, but did change his story a lot while he was with her. “He took care of them and the whole house. He loved them very much,” she noted.

Jurors would hear from pathologists, police officers, crime scene investigators and powerful emotional testimonies of firefighters. A CASA volunteer also took the stand for the State.

Editor’s Note: It was expected that the State would rest at noon on Wednesday, with Defense taking the stand with any witnesses on Thursday morning. The case will then be decided by the jury, who has listened intently all week to the evidence presented.