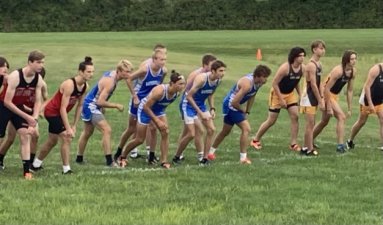 Both Batesville cross country teams and South Ripley’s girls team picked up championships at the East Central Invitational on Saturday in St. Leon.

On the boys side inside Division I action, the Bulldogs dominated three other teams in the field and won the invitational with a total of 28 points. Hagerstown was runner-up at 51 points while East Central was third with 61 points and Connersville was fourth with 83 points. Batesville’s Ean Loichinger was the individual winner of the race, winning in a time of 16:48.7 while teammate Ben Moster was runner-up in 16:54.4 and Daren Smith was third at 17:37.

The Lady Bulldogs completed the sweep of Division I meets, winning with 25 points as East Central was a narrow runner-up at 31 points. Taylor (OH) and Hagerstown were third and fourth respectively with 81 points and 114 points. Batesville freshman Kaylnn Bedel finished second overall in a time of 19:58.20 and four more runners finished inside the top 10.

Lily Pinckley crossed the finish line in fourth place at 20:46.1, Megan Allgeier was fifth at 20:59.2 and Ava Hanson ran sixth in 21:09.8 while Maria Lopez was an eighth place finisher in a time of 21:18.3. The Lady Bulldogs were rounded out by Madison Rahschulte’s time of 22:52.1 and Katie Olsen’s time of 24:06.1.
Division II action saw South Ripley come away with 29 points and a championship while Jac-Cen-Del was second with 44 points and North Decatur ran third with 47 points. Hauser and Lawrenceburg competed but did not field full teams.

Four Ripley County runners found themselves in the top five as Lanie Nicholson of South Ripley won the Division II race in a time of 20:22.4 and teammate Emily Campbell was runner-up in 22:16.1. Jac-Cen-Del’s Cloey Simon was fourth at 22:56.4 and Kayla Simon was fifth in 23:25.2.

Jac-Cen-Del finished the Division II boys race in second place with 46 points while South Ripley was third with 62 points and North Decatur sat fourth with 68 points. Lawrenceburg won the meet with 38 points. The Eagles however did score the individual win in the boys race as senior Josh Pohle finished first in a time of 17:53.8. Teammate Adam Maloney was fifth in 19:15.2 and Cameron Reatherford was 10th in 20:39.4.