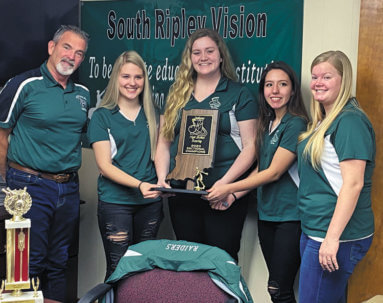 
Pictured from left are: Tim Taylor, president of the SR Board, Abagaile Hewitt, Ellianna Waldron, Jasmine Alvarez, and coach Erica Hewitt, as the girls were honored for bowling this year. Adelle Nuxoll and Abigale Kieffer were not pictured.

The February meeting of the South Ripley Board of School Trustees began with several recognitions. Superintendent Rob Moorhead, along with the board, congratulated the girls and boys high school bowling team for being sectional champs this season. Most of the bowlers were in attendance at the meeting, some with parents. Supt. Moorhead thanked Ron Pollard, coach for the boys, and Erica Hewitt, coach for the girls. “Thanks for partnering with the school and this community and all you do,” said Moorhead.

High school principal Joe Ralston was in attendance and also congratulated the teams. He said the players were fun to watch and felt that their bowling success could open scholarship opportunities for the players. The high school archery team was also praised for their efforts this year with Ron Buchanan and Trish Kappes coaching the archers. The board noted that the sport of archery is growing at South Ripley and other schools statewide.

Under personnel, all recommendations were approved by the board as follows:

South Ripley’s eLearning Coach Brett Miller was on hand to explain about the Dell 3100 2-in-1 chrome books. He recommended the approval of these books for the device refresh for next year for grades K-4 and 11-12. He noted it was a durable electronic device and had the flexibility of including both a touch screen and a keyboard. Some of the devices were available for board members to check out at the meeting. This met with unanimous approval. Also, it was approved for the scheduled eLearning Day set for November 11, 2020 to November 4, 2020 so they could have a full day for Veteran’s Day to continue the tradition of programs to honor local veterans.

Supt. Moorhead said, “I am excited about the flexibility of the new chrome books.” Tim Taylor, president of the board, also noted that he liked the option of the touch screen. They have a plan to return the old ones, and eventually have the chrome books streamlined throughout the whole school.

A video of the school that highlighted STEM activities was shown. Miller had created the video in-house with drone footage that was shot by assistant principal Ryan Lauber. This is for a potential $50,000 STEM grant. The superintendent was proud of the effort that was put into getting the video together, saying, “We will use it for other things to promote our schools.” He said it was as good as, if not better than, professional videos he has seen.

In other news, the board approved the three-year farm crop lease bid of Bud (Grover) Prather and Sons in the amount of $265 per acre for the 46.89 acres the school owns. This was the highest bid the school received. They also approved to continue leasing the crop for the field beside South Ripley Elementary School (30.78 acres) to be used for the FFA Account and the school’s Agriculture program. The crop lease funds from the Decker land purchased in 2019 behind the high school (16.11 acres) was recommended to go into the operations fund.

A Windsor Sabre Walk-Behind 17” Scrubber from the Oldenburg Academy was approved. It was given to the school and is valued at approximately $1700 “as is”. The superintendent and members thanked OA for the generous donation.

On the official count day in the fall there were 1144 students. The spring count was 1134. Supt. Moorhead noted this was typical for funding, that they usually fluctuate about 10 or so students.

Registration days for kindergarten students for the next school year are April 15 and 16.

The Indiana Internet Crimes Against Children Youth Educators will present an age appropriate Digital Safety presentation on April 1. An evening session will be held that will be available for parents.

The Energy Savings Project was discussed with Supt. Moorhead saying he and Lana Miller, business manager for the school, had met with Damian Maggos of Raymond James Financial and reviewed the projected financing. More will be heard about this at the next meeting. The bond sale will take place in March.

The South Ripley board meets every third Monday of the month at 6:30 p.m. in the administration building.