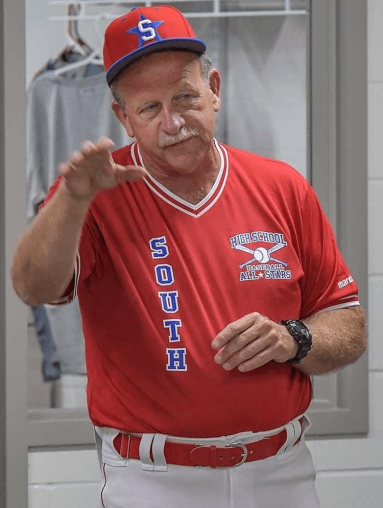 
Jac-Cen-Del head baseball coach David Bradshaw earned his 500th career coaching win in a 10-0 win over Morristown on Friday night. Bradshaw, who is seen here guiding the 2019 IHSBCA South All-Star team, has earned all 500 wins at the helm of the Eagles and is one of the longest-tenured coaches in the state.

David Bradshaw has done just about everything a head coach in high school sports can do. Whether on the basketball court or the baseball diamond, the Jac-Cen-Del graduate has done nothing but give back to his alma mater, delivering accomplishment after accomplishment and win after win which includes a 2009 Class A boys basketball state title with the Eagles.

But it’s no secret that baseball has been Bradshaw’s passion and his longtime track record as head man for Jac-Cen-Del baseball only grew this past Friday as Bradshaw collected his 500th career coaching win as the Eagles busted up Morristown 10-0 in six innings played in Osgood.

Bradshaw was set to grab the monumental win this past Wednesday at Edinburgh but the game was canceled, leading to the opportunity to get the victory at home in a season opener. All 500 career wins he has earned have been done in a Jac-Cen-Del uniform.

Adding even more fun to the evening was the fact that Gehl and Hughes each pitched three innings on the mound and combined for a no-hitter in the season opener. Gehl pitched the first three innings and struck out five while walking three with Hughes coming through in relief and striking out three batters.

Bradshaw, who has led the Jac-Cen-Del program as far as the Class A Final Four inside state tournament play, was honored with a presentation and fireworks display following the game amid a large crowd in attendance to witness the historic mark.