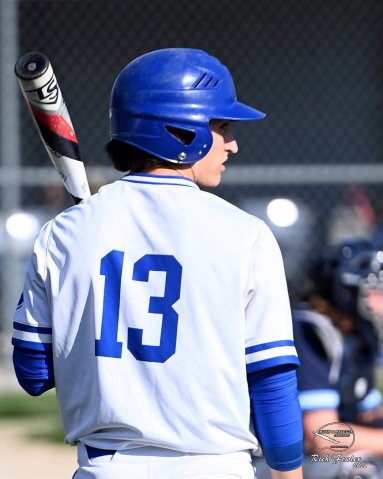 
Batesville’s Calvin Sherwood gets ready to stand in for an at-bat in a home game at Liberty Park. Sherwood totaled three hits in two games last week to help the Bulldogs to a pair of wins.

Batesville baseball has yet to find itself in the state rankings this year but that perhaps changes this week after two more big wins this past Thursday and Friday.

The Bulldogs started with an 8-1 blowout of Class 3A No. 7 Franklin County on Thursday night in an Eastern Indiana Athletic Conference game played in Brookville to complete a regular season sweep of the Wildcats. Batesville did most of its damage in the first three innings of the game, leading 2-1 after the first inning and then scoring three runs in the top of the second and one run in the top of the third.

Batesville added two insurance runs in the top of the seventh and sealed the win in the bottom half of the frame.

Brandt Ertel was 2-for-3 with a double and a run for Franklin County.

The pitching win went to Zink after five innings of work. He allowed an earned run on four hits with seven strikeouts and two walks. Brandt Ertel was hit with the loss for the Wildcats after lasting just three innings. He allowed six runs -four earned- on seven hits with four strikeouts and three walks.

The two teams each scored a run in the sixth inning before Lawrence North bowed out in the top of the seventh.

Batesville (9-4, 4-2 EIAC) entered this week on a three-game win streak and visited rival Greensburg in an EIAC game on Monday night. The Bulldogs are at Milan tonight in a Ripley County battle.