Rob Lafary
Staff Writer
Published in the Osgood Journal, May 11, 2021 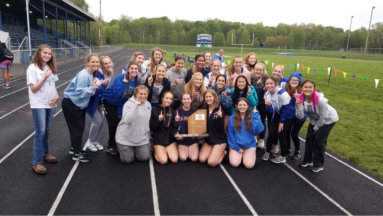 
Batesville boys and girls track and field dominated the competition en route to repeating as Ripley County champions. The Bulldogs now prepare for this week's EIAV Championship meet at Rushville.

Batesville won a combined 25 of 32 events and continued its stranglehold over competition inside the county as the Bulldogs swept the Ripley County Championship track and field meet on Thursday night at home.

The effort marks a repeat championship performance by both teams going back to the 2019 county meet.

Batesville won 14 of 16 events in the boys meet, winning the championship with 125 points. Jac-Cen-Del finished runner-up with 45 points and South Ripley was third with 39 points. Milan scored 29 points and finished fourth.

JJ Kuisel ran as part of all three championship relay teams and won the 400 dash while Ean Loichinger won the 3200 run and Kurt Siefert won the long jump. Dillon Murray, Daren Smith and Willy Sherwood each picked up a relay win.

Smith was runner-up in the 800 run and Sherwood ran runner-up in the 200 dash. Other second place finishers for Batesville were Nate Deputy in the pole vault, Nathan Villani in the 1600 run, Vonley Hund in the 400 dash and Adam Hollowell in the 3200 run. Hamilton was third in the long jump.

South Ripley’s lone winner was Ryan Miller who won the shot put event and set a new county record in the process. Miller’s throw of 46 feet and 4.5 inches broke the previous record of 44 feet and 7 inches set by Jac-Cen-Del’s Tyler Johnson in 2014.

Miller was a runner-up in the discus and William Tunny was second in the 110 hurdles, 300 hurdles and high jump. Jaden Peetz was third in the high jump while Nick Zigan, Hayden Hooten, Leo Aldini and Cameron Reatherford were third in the 3200 relay. Tunny, Blake Volz, Mateo Villegas and Tanner Franklin were third in the 1600 relay.

On the girls side, Batesville repeated as county champs with a team score of 110 points. South Ripley was runner-up with 58 points, Jac-Cen-Del was third with 54 points and Milan placed fourth with 16 points.

Emily Flood won two events for South Ripley, winning the 110 hurdles and the 100 dash. Her time of 16.11 seconds in the hurdles set a new county record, breaking the previous mark of 16.50 seconds set by Jac-Cen-Del’s Kelsey Bowling in 2015.

South Ripley’s Lanie Nicholson was runner-up in the 3200 run, Lena Conradi was second in the high jump and the team of Flood, Janire San Miguel, Eva Ayala and Shelby Bastin finisher runner-up in the 400 relay. Bastin, Conradi, San Miguel and Abby Kieffer were third in the 1600 relay.

Jac-Cen-Del’s Cloey Simon was named the MVP of the girls county meet after winning the 300 hurdles and setting a new county record in the event. Simon’s time of 48.40 seconds beat the previous record of 49.35 seconds set by Batesville’s Clare Bruns in 2015.

Milan’s Lucy Lillis, Madison Cavins, Emma Jutzi and Sarah Lillis finished third in the 3200 relay and Sophia Thomas was third in the high jump. Issabella Knueven was runner-up in the discus.