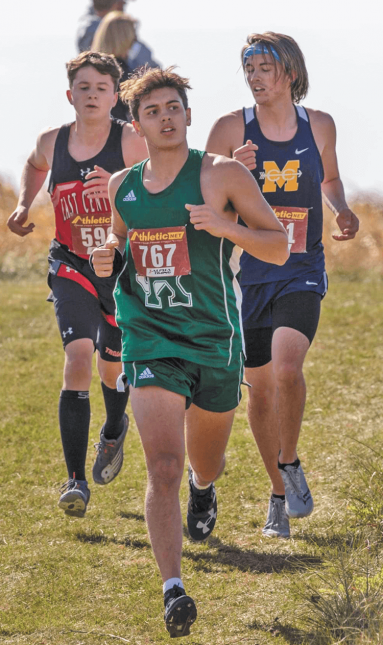 
South Ripley’s Blake Volz surges ahead of Milan’s Ayden Potts in the boys portion of the IHSAA regional meet. Volz and Potts each were making their first appearance in the regional for their respective school.

Batesville placed in the top five in both the boys and girls meets to punch their ticket to the semi-state meet and five local runners advance after successful runs at the IHSAA Cross Country Regional held at Franklin High School this past Saturday.

Batesville’s best finish came in the girls meet as the Bulldogs placed second in the regional meet with 65 points, just six points shy of regional champion Center Grove who won with 59 points. Franklin finished third with 70 points with Whiteland and Indian Creek rounding out the five semi-state team qualifiers with 92 points and 148 points respectively.

South Ripley competed in the girls regional meet and finished ninth with 221 points. Lanie Nicholson led the team and earned a berth in the semi-state as an individual qualifier, finishing 17th overall and fifth among individual semi-state qualifiers in a time of 20:09.50. Deborah Murphy was 40th in 21:15.40 and Emily Campbell ran 60th in 22:26.30. Other Lady Raider finishers included Kara Young in 24:51.30, Ava Ralston in 25:15.30 and Lucie Nicholson in 31:07.40.

On the boys side, Batesville ran third and advanced to the semi-state with 83 points. Center Grove won the regional with 28 points and Whiteland finished runner-up at 61 points. The top five was rounded out by Greenwood with 106 points and Franklin with 110 points.

Milan and Jac-Cen-Del each ran two individuals in the regional with each school having one runner qualify for the semi-state. Milan’s Ben Riehle qualified with a 16th place finish at 17:25.70 and teammate Ayden Potts ran in 19:51.50. Jac-Cen-Del’s semi-state qualifier was Josh Pohle who ran 21st overall in a time of 17:30.90 and Damon Hughes finished the regional in 18:39.90.

South Ripley ran three runners who finished their season at the regional. Blake Volz led the Raiders in a time of 18:58.70 while Hayden Hooten ran in 19:50 and NIck Zigan finished in 20:07.70.

The semi-state championship meet on Saturday will be held at Blue River Park in Shelbyville at 10:30 a.m.