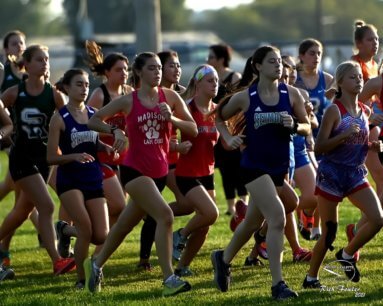 
Sixty runners take off as part of Tuesday’s Batesville Invitational race. Batesville and South Ripley claimed titles at the event.

Batesville’s girls and boys teams alongside South Ripley’s boys and girls teams picked up cross country championships as part of the Batesville Invitational on Tuesday evening.

The Lady Bulldogs won the girls large school division of the race with 27 points, besting runner-up East Central by three points. Rushville was third with 82 points while Seymour was fourth at 112 points. Franklin County, Lawrenceburg and Madison all competed but were unable to field a team score.

South Ripley was crowned the winner of the small school division with 23 points and Jac-Cen-Del was runner-up at 41 points. North Decatur sat third at 61 points while Milan and Oldenburg Academy competed but were unable to field full teams.

The Lady Raiders were first, second and third individually with Lanie Nicholson winning the race in a time of 20:14.40 and Emily Campbell finishing runner-up at 21:58.50. Deborah Murphy was third in 22:36.20 while Shelby Bastin and Kara Young rounded out the top 10 in times of 24:38.60 and 26:06.30 respectively. Elizabeth McKittrick was the final South Ripley runner, finishing in a time of 29:16.

Boys racing saw Batesville win the boys large school division with 30 points and East Central finished second with 59 points. Seymour’s 64 points was good enough for third place while the top five was rounded out by Rusvhille’s 87 points and Franklin County’s 132 points. Lawrenceburg was sixth with an identical 132 points but placed sixth on a tiebreaker.

South Ripley bested Jac-Cen-Del to win the boys small school division. The Raiders won with 24 points while the Eagles were second with 36 points and North Decatur was third with 63 points. Milan and Oldenburg Academy competed but did not field complete teams.

Oldenburg had two runners in the event with Carter Walsman finishing fourth overall in 19:19.20 and Santiago Schutte running in 22:16.20.

The Twisters run on Saturday, October 9 at South Dearborn while Batesville runs at the Greensburg Invitational today. Jac-Cen-Del hosts South Ripley and Milan on Saturday as part of the Ohio River Valley Conference Championship meet.