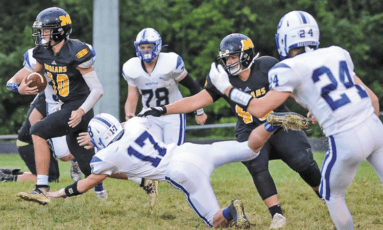 Mark Twain penned a classic motivational quote when he said, ¨It´s not the size of the dog in the fight, it´s the size of the fight in the dog.¨ Down 27-16 heading into the fourth quarter at Milan on Friday night, the Batesville Bulldogs brought the quote to life.

Having scored just two points in the third quarter, Batesville kicked its offense into high gear and the result was 26 unanswered points in the fourth quarter, erasing an 11-point deficit to knock off Milan 42-34 in the annual Ripley County Bell Game. The win is the fourth for the Bulldogs in the last six meetings against the Indians but arguably is the biggest victory in the rivalry series in recent years.

¨Overall I was pleased with the effort and energy from our team,¨ Batesville head coach Evan Ulery said of the win. ¨This team so far has shown they are resilient and mentally tough after dealing with multiple injuries, the tough week one loss and then being down two scores in the third quarter of this game.¨

The comeback started just eight seconds into the fourth frame and with quarterback Travis Lecher putting the offense on his back. Lecher started the quarter with a four-yard touchdown run to cut the deficit to 27-22 and gave Batesville the go-ahead touchdown with 7:14 remaining, running six yards to the endzone for the Bulldogs´ first lead of the night at 28-27.

Batesville never trailed the rest of the way and Lecher went to the big play to give the Dogs some extra cushion. With 3:34 remaining, the quarterback found Kurt Siefert on a 56 yard touchdown pass followed by a Braiden Foster extra point and then Lecher took off on another quarterback keeper, this time sprinting 91 yards to the house for a score with Foster connecting on another extra point.

Down 42-27, Milan scored with only 18 seconds left on a seven-yard touchdown pass from Peyton Wert to Adam Norman with a made extra point by Ethan Kaulig but the Indians were unable to get the ball back on the ensuing kickoff and was forced to watch Batesville pick up its first win of the year.

¨We continued to preach to stick to the game plan and do not panic as we were just not finishing drives and missing on some big pass plays,” Ulery added. ¨We finally started getting in a rhythm offensively and was able to rattle off four unanswered scores.¨

Milan´s Logan Reed and Lecher traded touchdown runs for a 7-7 first quarter tie before Milan took control of the game with a pair of second quarter scores. The Indians went up 21-7 on Reed´s second touchdown run -a four-yard run- and a 13-yard pass from Wert to Norman with both extra point attempts good by Kaulig.
The Bulldogs trailed 21-14 at halftime on a three-yard pass from Lecher to Siefert and Foster extra point. Peyton Cavins forced the safety in the third quarter before the Bulldogs big fourth frame.

Lecher accounted for 367 yards of Batesville´s 485 yards of total offense including 151 rushing yards with four scores and 216 yards on 8-of-18 passing with two touchdowns. Austin Pohlman ran for 112 yards on 24 carries and Siefert two touchdowns and 119 yards on five catches.

Milan had 348 yards of total offense and Wert accounted for 276 yards with 170 rushing yards on 18 carries and a score alongside 106 passing yards and two touchdowns on 7-of-24 passing. Reed led with his two touchdown runs and 51 yards on 14 carries. Norman led Indian receivers with 95 yards on six catches with his two scores.

Milan (1-1) hits the road on Friday for a tough non-conference battle at Lawrenceburg. The Tigers defeated Mount Healthy (Ohio) 14-7 last Friday.
Batesville (1-1) plays its first home game of 2020 on Friday against South Dearborn in an Eastern Indiana Athletic Conference game. The Knights defeated Madison 32-26 in overtime on Friday.