Wanda English Burnett
Editor
Published in the Osgood Journal, May 7, 2019 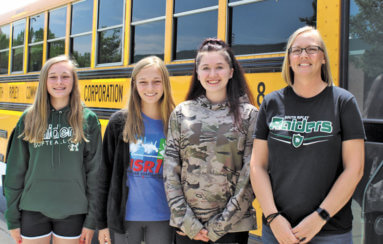 
They are thankful for South Ripley’s bus #8 driver, Tricia Kappes, pictured, with three students, Lanie and Lucie Nicholson and Isabelle Holman, who helped get Mr. Hurelbrink out of a ditch.He had fallen the night before after his mower got stuck and laid there all night.

It was an ordinary day as bus driver Tricia Kappes picked up students on April 23 until she turned on a road south of Versailles. She could see something in the distance, but didn’t realize it was a person until she was much closer. That person, Bob Hurelbrink, had fallen and was in the ditch by his home.

Kappes quickly called back to South Ripley and then told her students what was going on. “They are such a great group of kids,” she told the Osgood Journal. The oldest three on the bus, Lanie Nicholson, a ninth grader, her sister, Lucie Nicholson, a seventh grader and Isabelle Holman, a sophomore, volunteered to help. They helped him up, but he couldn’t stand long. So Lucy ran up to the porch and got a chair and brought it down by the roadway and they helped him to sit.  In a short time, Jeff Thielking, school resource officer, responded and stayed until medical help arrived.

“The girls didn’t think twice,” Kappes said. Isabelle said, “We saw the older gentleman and immediately I thought, ‘what can we do for him?’” The Nicholson sisters had the same sentiment. The three were so thankful last week when they found out that Mr. Hurelbrink was doing fine and would be home soon.

South Ripley School Superintendent Rob Moorhead noted, “I am proud of the way Tricia reacted to seeing a person in need. A common refrain students hear at South Ripley is ‘Do the right thing. Treat people right.’ Tricia certainly practiced this when she noticed Mr. Hurelbrink and stopped to help. She set a great example for our students of what to do in this type of situation.”

Daughters of Mr. Hurelbrink – Diana Hurelbrink and Barb Peabody –  were equally thankful that the bus driver was vigilant and responded quickly. Their father had been mowing in a spot across the road from his house when the mower got stuck. As he tried to get back to the house, he slipped in the soft ground where he laid all night. “His body temperature was 91 degrees,” Barb noted.

A veteran of World War II, Mr. Hurelbrink said he has been through a lot in his life, and wasn’t too afraid of being in the ditch, but he wasn’t fond of the cold night. He told the Osgood Journal he is 91, about to turn 92 in July, and just retired from farming at the age of 87.  He and his wife June, who passed away in the past few years, lived on that farm for a long time. They were married over 60 years before her death.  He said he used to “carry the mail” and farm. He had a quick smile and was jolly enough after the episode that probably upset his family and friends more than it did him. He has been staying at Ripley Crossing in Milan for a bit, but said, “I want to go home,” to which his daughter assured him they were working on the situation.

Londa Hobbs, his neighbor, said Mr. Hurelbrink and his wife have been wonderful neighbors since they moved closed to them. Londa said she was raised in the city, but loved the farm life. She noted that he had taught her a lot about farming over the years as she helped him. She said, “The bus driver of bus #8 is to be commended.” She felt it was such a good thing for them to come to her neighbor and friend’s rescue.

The Hurelbrink family takes vacations together each year. This year they had already made plans to camp on the “home-place farm” and have day trips to Versailles State Park, Clifty State Park and other places. Barb said her son teased his grandpa and said, “He was just practicing for camping out!” to which Mr. Hurelbrink laughed and said he didn’t really want to camp out that way.

Editor’s note: Londa Hobbs called the newspaper to let us know about this story. If you have a story of someone doing a good deed, and you would like to see a story in the paper, please contact: wburnett@ripleynews.com.