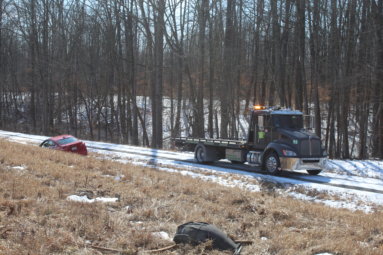 
Above is where a car landed after crashing through the Big Oaks or JPG fence on South Michigan Rd. Monday around noon.

A crash on South Michigan Road Monday, February 8, around noon had people in that area talking again about the size of the drop offs from the pavement to the ground. Although the crash doesn’t appear to be from the drop-off, it still brought the situation to light.

“Someone is going to get killed,” Artie McGuire noted. He lives at 9785 S. Old Michigan Rd., just a few feet from where Betty Jo Mitchell of Osgood, lost control on Monday, went off the roadway in a curve and through the Big Oaks (formerly Jefferson Proving Ground) fence to rest about 50 yards from where she left the roadway.

“I don’t know what happened,” Mitchell noted, saying she was on the road, felt the gravel (or cinders) and then it was all over. She refused treatment at the scene with her sister picking her up.

Cpl. Rob Bradley of the Ripley County Sheriff’s Office investigated the scene and said she was traveling southbound when she came around the curve and lost control in the cinders and went off the roadway.

Mitchell was driving a 2017 Chevy Cruze that was towed from the scene.

McGuire was very upset and noted that the county highway should do something because he says he has pulled many people out after they have run off the roadway due to going off the high berms left after the county highway paved that section. He also was concerned about the position of poles along the roadway that are extremely close or in the ditch lines. He said, “If you just get off the road a little, you got a pole in your vehicle.”

Ray Toops, supervisor with the Ripley County Highway Department, told The Versailles Republican that he has met with a commissioner and a couple of his operators and knows there is a problem on that roadway. He asked that the motoring public be patient as they continue to work to mitigate the situation.

“We have three things we are in process of doing,” Toops said. He explained they are pulling areas of the ditch line up to the road to make it more even. That won’t work everywhere on the road, but will help and will go about three feet out. “Where we can’t do that, we will haul dirt in, and in some instances creek rock in other areas,” he told the newspaper. They have already done a small section and feel like it will make a big difference. The problem now is the weather. As soon as it clears so the county workers can get out there, they will work on the problem.
Cpl. Bradley suggested that motorists slow down on all of the county roads, especially be aware of weather conditions, and just in general drive with caution.