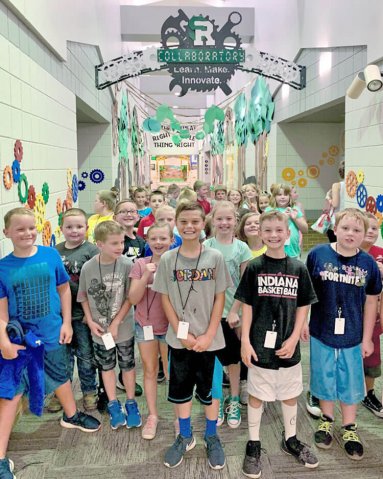 
Just after enjoying lunch, a group of SRES students, pictured left, gathered in the main hallway for a photo by the new Collaboratory rooms. Justin Sturgeon, local metalworker and SRES parent, created the gears hanging on the wall in addition to the large arch overhead. Chozen Designs created the gear clings seen near the door frames of each classroom. One student shared during lunch that she has already been in the Collaboratory and had fun customizing one of the robots with her class. In addition to commanding robots to complete certain tasks, she said that they can be programmed to change colors and make different sounds.

An idea that was planted at SRES last year has now grown and blossomed into two, state-of-the-art spaces in the main hallway of the school. Previously used as sixth grade classrooms, those spaces are transformed thanks to grant funding and the vision of two teachers, Sheena Speer and Leslie Rennie. The two rooms are collectively dubbed the “Collaboratory,” and each features several tools to facilitate students’ learning by encouraging creative thinking and a problem-solving mindset.

In the “orange room,” so named due to its bright orange tables, flexible seating, and decoration, a variety of robots and computer programming equipment resides. Across the hall, the “blue room” is all about engineering, featuring building blocks and other equipment.

Third grade teacher Leslie Rennie says the rooms are meant to foster scientific inquiry, saying they are, “Spaces designed for teachers to bring students where they can explore and create with STEM related tools.”

STEM-learning, an acronym for science, technology, engineering, and math, is a popular initiative throughout Indiana schools now that seeks to integrate qualities of those four subjects into all areas of a student’s curriculum. Long term, the goal is to help prepare students for jobs in a quickly evolving world. Here and now, Rennie says SRES is, “Starting our kids off to have an engineering background.”

The STEM initiative in Indiana has grown so much that Speer, a SR grad now in her sixth year at the school, has transitioned from teaching at the fourth grade level to holding the title of STEM teacher. She says the Collaboratory rooms allow students to gain self-confidence in their ability to solve a problem. “We guide students in the right direction,” she says of the STEM-teaching mindset, “Rather than telling them what to do.”

An important part of that process is also helping students learn to accept failure. When it comes to problem-solving, “You’ve got to keep working through it,” Speer says, adding that there is often more than one way to solve any given problem. When a student overcomes a fear of failure and instead embraces it as a part of the learning process, she believes students can often achieve more than they originally thought possible.

The Collaboratory idea began last school year with minimal funding and equipment. Elementary Principal Amy Linkel shared that less than $1,000 was available then, and she gives credit to 5-Star Technology learning coach Brett Miller for “bringing the room to life” by creating robotics challenges for students.

Since then, the three ladies have procured $100,000 in grant funding which made the two new rooms possible. First, the corporation was awarded a $50,000 STEM acceleration grant through the Indiana Department of Education (IDOE). Thanks to that, every student in the school received a Project Lead the Way (PLTW) module this year, which is a computer based program that aligns with the state’s standards and also encourages STEM-style thinking. Then, another $50,000 digital learning grant was awarded to SRES through the IDOE. That money is going toward purchasing materials and for training teachers.

When walking into a room full of different robots, it is evident that teacher training is necessary to make the best use of the Collaboratory. With school just getting underway for the 2019-20 year, all of the elementary teachers recently spent time learning from each other and representatives from 5-Star Technology on how to make their time in the space count. Rennie, who is in her fourth year teaching at SRES, says that time spent in the Collaboratory should have a purpose. “It’s not just free play,” when it comes to using the equipment, but rather, “What can we do with it and why are we using it?”

For a subject-specific example, a teacher leading a section in geography could visit the Collaboratory and ask students to program a robot to draw a line between two cities. The students would locate the sites on a map, code the robot as to where to drive and draw, and then execute the sequence. Using the map scale, they could figure out the distance between the two points as well.

In the case of integrating robotics into geography, students are able to put their coding skills learned in Speer’s classroom to work. As a STEM instructor, Speer meets with each classroom in the school once per week to teach the state’s new computer science standards, which includes binary coding, knowing the parts of a computer, algorithms, computer vocabulary, and typing skills.

The choice to relocate two of the sixth grade classrooms to create the Collaboratory was straight-forward, Linkel says. Being right next to the cafeteria and located in the main hall, the two rooms were on the noisy side anyway. Choosing to feature the rooms front and center in the school helps set the tone that SRES is a place where students are encouraged to innovate and create.

Linkel expressed gratitude to the school’s custodial crew that helped clean out and reorganize the rooms. Local partners have also helped: SRES parent and metalworker Justin Sturgeon created the arch and gears that now hang in the main hallway, and Chozen Designs created the wall clings that decorate the rooms.

“The school couldn’t do something like this without great leaders,” Linkel adds, giving a nod to Speer and Rennie for the effort they put forth to make the vision for the Collaboratory a reality. In addition to using grant funds to purchase supplies for the rooms, the two teachers have invested in professional development for themselves and their peers.

Over the summer, Rennie and Linkel attended the International Society of Technology in Education conference in Philadelphia, Pennsylvania. Rennie said that many of the tech items featured at the conference are the same as those found in the school’s Collaboratory. Seeing that South Ripley was utilizing the tools to be considered at the forefront of the STEM initiative gave her confidence to start the school year.

The Collaboratory is a part of the school’s technological evolution. Five years ago, SRES dedicated a room called the Sandbox. It features computers and a large projector screen for classes to use. Then, the school became “1:1,” meaning that every student is given their own iPad or Chromebook. Now in the Collaboratory, students use coding language to program robots with names like Dot, Dash, and Cue, which all have different capabilities.

“Technology changes every day,” Rennie says, adding that in another five years, the school’s utilization of technology will change, too. Speer notes that technology is rapidly changing in the workforce. She gave the example of farming, a profession that is thought of as traditional, but today employs computers and GPS through each step of the planting and harvesting process. Even the seed a farmer sows is optimized by scientists and engineers looking to boost yield and efficiency.

The ladies say embracing this change, and facilitating students to do the same, will prepare them for a future that will likely look much different than the present. By using today’s top tech and teaching methods, they hope that means fostering the next generation of problem solvers who will make the future a bright one.