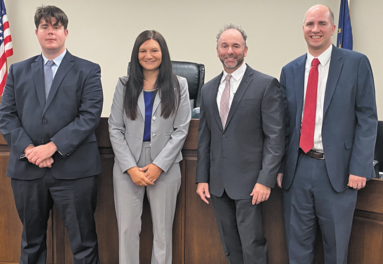 Ripley County’s newest deputy prosecutor, Rae Luhrsen, was sworn in Tuesday, September 22 by Superior Court Judge Jeffrey Sharp. There was a contingency of family members and staff of the prosecutor’s office to witness the ceremony and to wish Luhrsen well in her new endeavor.

It’s not really new as Luhrsen has been working summers in the prosecutor’s office, getting familiar with the process and the people. Prosecutor Ric Hertel noted that he usually reaches out to the law departments at Indiana University and/or Northern Kentucky University (Chase Law School) for interns or law clerks. This time the county got a keeper.

Hailing from Manchester, Luhrsen, who is 25, said she really didn’t aspire to be a lawyer, but with an English degree and in her senior year of college, she made the decision and hasn’t looked back. “I took a law test and got a great scholarship to NKU,” she told The Versailles Republican. She was hooked from the beginning. “I just loved it,” she noted.

Luhrsen graduated from NKU in May, passed the Bar in August, was sworn in on Tuesday, and was having her solo ‘performance’ in court on Wednesday of this week. She explained that throughout her time as an intern she has what is known as a certified legal intern license, meaning she could do certain cases, but with another member of the prosecutorial team present. She has a lot of practice from her time with the local office and says she’s ready.

Prosecutor Hertel said she has definitely “hit the ground running” and is proud to have her on his team that includes Shane Tucker and Ryan Marshall. “We’re glad to have her. She’s going to be an asset to law enforcement. We’re hoping she has a long career in Ripley County,” Hertel told The Versailles Republican.

Being close to her home in the Manchester/Aurora area, is important to Luhrsen, but she says she’s glad it’s not in her home county. In her spare time, which she’s had very little of the past year, she loves being with her three dogs, camping, and boating. She admitted she’s more of an “outdoor” person. She feels this is a great stress reliever after being in court all day.

Luhrsen was welcomed to the prosecutor’s office, where they are pushing forward with cases that affect the everyday lives of the citizens they serve.