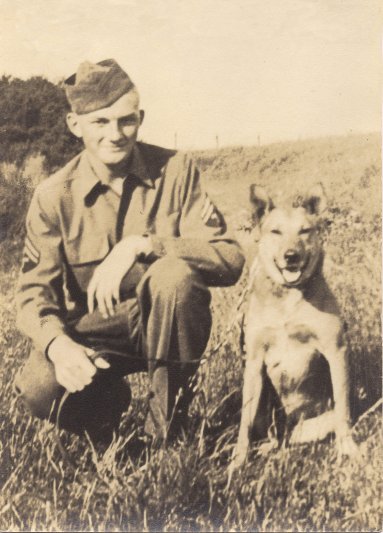 Sgt. Edwin P. Smith and his dog, Fearless pictured above.

Dogs have long been touted as man’s best friend. That was never more evident than in World War II when war dog platoons were in existence. One Cross Plains man, Sgt. Edwin P. Smith, served in the 26th Infantry Scout Dog Platoon (1943-1946) and was known as a handler. This specialized group was of great value in the war effort.

An article printed in The Versailles Republican March 8, 1945 reads:
Martin Smith of Cross Plains received a letter from a resident of Grand Junction, Colo., this week,which contained a picture taken from the Daily Sentinel of that town which pictured T/5 Edwin Smith and four companions with their dogs on Luzon. The following article came to our desk this week.

With 25th Infantry, Luzon – One of three war dog platoons, hunting down Japs and delivering messages in the Philippines is attached to the 25th Infantry (Tropic Lightning) Division in central Luzon.

When field telephone lines were disrupted at a forward observation post, a very skeptical officer grudgingly consented to send a message by war dog for badly needed artillery fire. The artillery position was nearly a mile away behind four ridges. Within five minutes after the animal left, shells began whistling towards the Japs.

Lt. Head owned hunting and show dogs before he joined the army while Sgt. Robertson had 12 years experience handling pack and sled dogs as a fur trader in the Yukon Territory. The Sergeant was awarded the Bronze Star for outstanding performances of duty during the Morotai operation.

There are 19 war dogs attached to the 25th Infantry (Tropic Lightning) Division. Most of these are messenger dogs while the remainder are scout dogs. The dogs have been trained by Army Dog Training Schools located in five various localities in the United States. All dogs used by the services have been donated by private owners through “Dogs for Defense”, a non-profit organization with offices in New York City and representatives in most communities. After the war according to present plans, war dogs will be medically inspected, easily detrained from war methods, and returned if desired to former owners. Otherwise they will be sold for one dollar apiece to eager buyers.

German Shepherd dogs, after extensive tests, have proven most adaptable to climatic conditions. This is particularly important in areas such as the Philippines where the 25th Infantry Division is located. War dogs were also used in the dim, thick jungles when the Japs were smashed in the Guadalcanal and Central Solomons campaigns. One dog of the unit was killed by a booby trap while several have been missing from missions behind enemy lines.

War dogs are trained to be very suspicious of strangers. When they seize hold of a person they snap again and again in a slashing manner. For this reason they are fed by and sleep near their own particular trainer.

War dogs have been taught to indicate when they smell or hear any human beings. Depending on the wind they can indicate the enemy up to 800 yards away. They are taken on leash, by their trainer, along with forward patrols to prevent ambush and to run messages. One trainer and dog act as scouts while two men and two dogs make up a message team, the dogs can cover a mile in an average of three minutes.

The dogs have been trained to take cover when the going is “hot” and although gun fire does not deter them from duty, like humans they become nervous under excessive shell fire. The dogs similar to hunting dogs, only “point” when indicating the enemy. They never bark, thus earning the name of “Silent Scout”.

Accompanying one patrol halted at the edge of an open area the scout dog “pointed”. Nothing was to be seen across the 300 yards of fields up to clumps of bushes and bamboo trees. A Piper Cub plane was dispatched for observation and by radio they reported that more than 180 Japs were lying in wait, on the edge of the woods, for the body of American troops to approach.

On Morotai Island, a stepping-stone near the Philippines, official records indicate that war dogs accompanied more than 200 patrols but not one was ambushed.

Another valuable use of scout dogs was recently illustrated. A dog gave a “high point” toward a wooded ridge. Cautiously the 25th Division patrol advanced and peered down through heavy undergrowth into an old quarry where slight sounds had been heard. There, was another American patrol. Had either unit heard the other without indication by the dog, grenades and machine guns would have been busy. Triaggers are quick in forward positions.

Asked the oft-repeated questions as to the war dogs’ diet, Lt. Head smiled and replied “We feed them just C ration.” Most GI’s won’t be surprised to hear this.

Editor’s Note: We thank Jerry Smith of Milan and the Ripley County Historical Society for sharing this information with us to share with our readers. Thank you to all who have served and those who continue to serve.

Editor’s Note: The information for this story was provided by the Ripley County Historical Society.