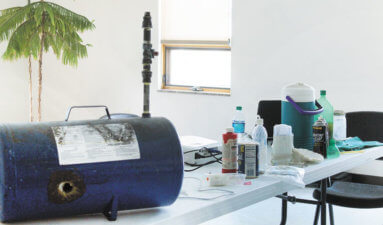 
ISP Trooper Chip Ayers showed some of the items one might need to manufacture meth. Of course, he didn’t display all the ingredients...but some that do not seem like something one would want to ingest. He gave a talk about the use of meth in the county and said it is the most used drug in Ripley County at this time and users will cross every barrier to obtain it.

One hit and you’re on the ride of your life – which will be significantly shortened in 94% of those who use meth, according to Chip Ayers, Indiana State Police Trooper. He noted that “meth users are the hardest to treat.” The statistics are that 94% will return to the drug after rehab or a stint in jail. Only six-percent will successfully get off the drug.

The seriousness of even trying meth was outlined in a presentation by Trooper Ayers at the April meeting of the Ripley County Drug Awareness Coalition. While the labs to make meth have decreased, the usage of the drug has skyrocketed due to the influx from drug cartels. “It’s easier for the meth user to get it already made,” noted Tpr. Ayers.  “Oh, meth labs still exist in southeast Indiana,” he assured those gathered in attendance.

This drug that causes psychosis, heart failure, destroys the nervous system, causes rotten teeth, open sores, hallucinations – just to name a few of its maladies, is spreading like wildfire. It causes hallucinations, where users will describe seeing “shadow people” or “demons” living inside them. One man took a knife and cut his abdomen tearing his insides out believing something terrible was inside him. He lived to tell about it. Another woman was not so fortunate. She thought she was on fire and she was. A shard of glass from a broken pipe pierced an artery and she bled to death.

Trp. Ayers said there’s no doubt about it “this is affecting our community in a negative way”. He’s on the frontlines everyday and sees the devastation left behind from the drug. “Meth is king in southeast Indiana,” he noted. He said while opioids are still a problem, meth is the greatest problem here by far. It’s the number one drug that people go to. Meth on the street is referred to as crank, crystal, speed, ice, glass, chalk, go-fast, Annie Dope.  In general it’s just called “dope”.

Meth users who are incarcerated many times have committed other crimes as a means to the end, which is ultimately to get meth and get on that high they are forever chasing. It’s not uncommon for those wanting meth to commit homicide, robbery, battery, burglary, child victim crimes and more. They are driven by the drug and the need to once again feel high. Even if they spend time in prison, they get out and will often find themselves with friends who use, and they are back in the saddle soon. Children who grow up in homes where meth is used, often fall prey to the drug just from being in the same house. “It’s a way of life,” noted Tpr. Ayers, who added, “Thirty-five percent of children will test positive for meth if they come from a home where it is cooked and used.”

The problem with getting the high over and over is how the brain is affected by the first time use. The first time takes the brain to a new level that releases all the dopamine one has, sending  feelings of euphoria that are not easily attained again. Tpr. Ayers explained that it takes a lot of time for the brain to rebuild that amount of dopamine and the person using has to immediately up the drug dose to even get a little bit of the grand first time high they experienced. It propels them into a world of always chasing the idea of getting that same high.

Something people may not know is that meth was developed by the Japanese before World War II and is the supercharged cousin to amphetamine, which is a common drug of choice for those wanting to get extra things done, just a little more energy than usual and perhaps lose some weight.

He said many veterans came home from war addicted to meth.  A pilot could fly a number of sorties and soldiers could march for hours with the stimulant in their bodies. They felt invincible. The now Schedule II Controlled Substance was used as a stimulant that took many a veteran through a long day with the darkness of night most certain.

The powdered meth looks like soft snow, an irrediscent blue. Meth from cartels looks like crystals, glass, even ice. A gram of meth is as much as a packet of sweet-n-low. That’s it. How long it will last depends on the user. Maybe a gram could last a week or some users might take three grams in a day or more or less. Meth lasts for 8-10 hours compared to the same amount of cocaine, which will only give one a 40- minute high.

Meth can be snorted, smoked, or most commonly injected directly into the veins with syringes. Which brings about a whole other problem when 80% of those using today take the intravenous route. This leads to sharing needles and then blood born pathogens and disease.

Holley Rose with the Ripley County Health Department tells another side to the meth problem. She noted that the health department will get a call when there has been a meth lab in a home and have to do what she referred to as an occurrence report. That means the health officers go into these toxic homes and take samples. If the samples are above the safety threshold, they have to make a report that attaches to that home. If people are looking to buy a property, they can see if meth activity was going on in the residence.

There is a process of decontaminating the home, which is costly. From a public safety standpoint, meth and the manufacturing or “cooking” is a dangerous environment. It can and has caused fires and explosions. Trp. Ayres noted that nearly everyone that manufactures meth, uses meth.

The bottom line to dealing with methamphamine is there is nothing that is good about it. It kills, leaving behind a trail of blood and tears.