Eagles on the nest, spring on the way 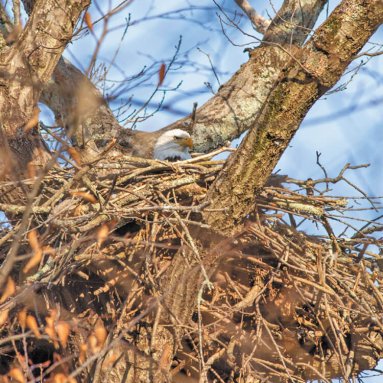 
A mature bald eagle looks out from its nest atop a bend in Laughery Creek at Versailles State Park in early February. Eagles add to their nest each season and it can grow to the size of a small car. Eventually, nests may fall and couples build a new one.

It’s not officially spring on the calendar for two more weeks, but don’t tell the birds that. Some small flyers, like song sparrows, chickadees, and titmice are singing more and more each day as mating season approaches.

For the resident bald eagles at Versailles State Park, it appears that nesting season is underway. Our national birds have been spotted sitting on their nest for roughly two weeks now.

Versailles State Park Property Manager Paul Sipples reports that this is the right time of year to see the eagles keeping their eggs warm. In another couple of weeks, if one or more eggs hatch, the chicks will stay in the nest for about 6-8 weeks, being fed by mom and dad, before they take flight on their own.

Sipples says both the male and female take turns on the nest. While mature eagles are challenging to tell apart, he shares, “The female is a little bit bigger than the adult male.”

Mature bald eagles are huge birds, male or female, measuring about three feet tall. Nests are normally a couple of feet deep, so a bird standing in the nest may be seen, while a sitting one may not.

Bald eagles build the largest nest of any North American bird and largest tree nest ever recorded for any animal species. Guinness World Records states the largest nest ever found was in Florida in 1963, measuring over nine feet wide, 20 feet deep, and weighing more than two tonnes.

For this reason, mature stands of trees are a necessary habitat requirement for bald eagles, as is proximity to water. The protected forest, lake, and creek in the park create the right conditions for the birds to call it home.

Bald eagles mate for life, but will find a new mate if one of the pair dies. At Versailles, the mature pair have built four nests and were first discovered by retired security guard Jim Bloom.

Typically, the birds will use a nest for up to five years. They add to the nest each year, and eventually they become so big that the tree support fails or a storm blows them down.

Given that timeframe, the mating pair at the park are likely between 10-20 years old. Sipples shares that 20 years is about the expected lifespan for the birds in the wild.

For visitors wishing to see a bald eagle, Sipples shares a few tips. To view the nest, bring a pair of binoculars to Heron’s Point shelter. Walk the short mowed path leading to the creek, and scan along the far bank of the creek to find what looks like a large, dark clump high up in the trees.

To get closer, rent a boat and paddle out of the main lake to the first bend in Laughery Creek, and look up in the same direction. Of course, these viewpoints are severely diminished once leaves are back on the trees.

On occasion, the Friends of Versailles State Park takes a group walk on the old section of Finks Road near Hasmer Hill and the old 4H camp, which is another place to see the nest.

There’s no public parking on that side of the park, but avid hikers (and mountain bikers) can make it there on foot beginning from the main section of the park. Be advised that this trek is over 10 miles round trip and involves crossing Laughery Creek, which may be impassable during high water. Pick up SIMBA’s mountain bike trail map to find your way. Any number of trails can be taken to get to the Last Chance trailhead. Last Chance crosses the creek and turns into Finks Road that leads to the view of the nest.

Away from the nest, the big birds can be seen hunting around the main body of the lake, especially in the morning and evening. “If the lake freezes over, the best place to see them is from the covered bridge to the dam,” says Sipples. There, they hunt for fish, small birds, mammals, and reptiles.

No matter where you go to look for the eagles, make sure to pursue them in an ethical manner. Adhere to park rules, stay on trails, and don’t harass or attempt to feed wildlife. Nesting sites for any bird should not be disturbed. Watch quietly from a distance and enjoy the wonders of nature.

Beyond birds, signs of spring will soon be found all over park grounds. “It’s an exciting time,” says Sipples. He encourages visitors to look for budding trees like maple, dogwoods, and redbuds. Then the woodland ephemerals will put on their colorful show, and mushroom hunting season follows.

No matter how you measure the progress of spring, there’s plenty to see, hear, smell, and feel at Versailles State Park to greet the new season.

Note: Versailles State Park will begin charging gate fees on weekends beginning March 27. Annual passes and other permits may be purchased at the park office.