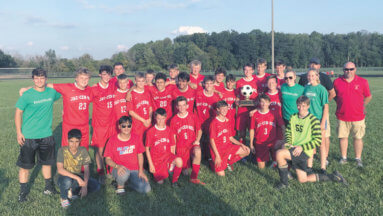 
Members of the Jac-Cen-Del varsity soccer team posed after their win over South Ripley with Coach Matt Obendorf’s children, Lauren and Ben Obendorf, and his niece, Reese Obendorf, who presented the memorial “Coach Mo” trophy to the Eagles. The traveling trophy is on the line in games between the two county rivals and remembers Matt Obendorf, former varsity soccer coach at South Ripley who passed away due to cancer in 2009.

The Jac-Cen-Del soccer team added one win and one tie in two games versus county and conference opponents last week.

On Monday, September 16, the Eagles hosted rival South Ripley for the first of two annual matchups that feature the memorial “Coach Mo” traveling trophy. The Eagles won last year’s final matchup between the two teams and hoped to keep the trophy, which they did with a 3-1 victory. South Ripley will have the opportunity to reclaim the hardware in the two teams’ second matchup approaching on Friday, October 4 at South Ripley.

The “Coach Mo” trophy is awarded in the memory of local soccer player and South Ripley coach Matt Obendorf. Obendorf’s children and niece presented the trophy to JCD after the game.

Against the Raiders, Jac-Cen-Del went up two goals in the first half while tying one goal apiece in the second half for the 3-1 win.

The Eagles’ first strike came near the 16:30 mark in the first half when Otavio Viotti pitched a ball into the middle of the field which Patrick Wagner put into the net using his head. Then, Ryan Wilson kicked in a goal with 4:40 remaining in the half to build the 2-0 lead.

The second half saw a goal from JCD’s Jacob Jines on a penalty kick. South Ripley’s Asier Garcia scored SR’s lone goal with an assist from Zach Gentile.

On Wednesday, September 18, the Eagles traveled to Milan for their second matchup of the season against the Indians. The first matchup, played on August 20, ended with a 6-1 score in favor of the Eagles. Wednesday’s match ended in a 2-2 tie.

Patrick Wagner scored both goals for JCD, while Milan’s Brody Lack scored his team’s first goal with an assist from Cameron Begley.

As the clock ticked down in the second half, Milan’s Josh Clark netted his team’s second goal for the tie. The final buzzer rang just a half second after Clark’s score, which was assisted by Brody Lack.

The tie brought JCD to an 8-1-2 record, and Milan to 6-2-2. Milan and JCD are currently vying for the Ohio River Valley Conference title. Although the two teams will not meet again in the regular season, they each have conference games remaining in the final two weeks of the season.

In addition to hosting Milan on Thursday, South Ripley faces off on the road with Shawe Memorial on Monday, September 23 and Switzerland County on Wednesday, September 25.