Eagles soccer soar to the regional 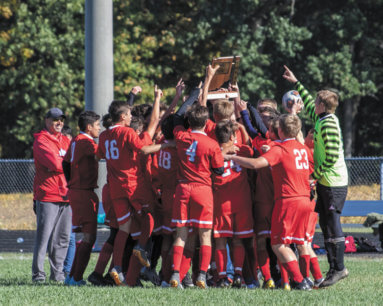 
The Jac-Cen-Del Eagles soccer team celebrates with their IHSAA sectional championship trophy after defeating the Southwestern Rebels on Saturday, Oct. 12.

The Jac-Cen-Del Eagles are Class A Sectional 45 champions after three straight wins on their home field last week. The tournament run came on the heels of their regular season ORVC championship and an impressive 13-1-2 regular season.

The Eagles lined up against the Southwestern Rebels in the sectional final, a team they beat twice previously during the regular season. The first of those games came on Aug. 30 when the Eagles won 4-1 on Southwestern turf. Then, the two teams met in Osgood on Oct. 3 where the home team routed the Rebels by a score of 9-1.

The first 15 minutes of the sectional final went scoreless as both teams attempted to implement their pre-game strategy. For Southwestern, that meant employing an extra defender on their goal, while JCD looked to get their offensive engine roaring.

With an assist from Tim Defranne, Eagles junior Jordan Meyer found the back of the net on a fine run past two Rebels defenders that ended with a kick past a third defender and the goalie. That goal seemed to settle some early nerves for the home team and the goals came pouring in thereafter.

Defranne earned his second assist of the game as the first half dwindled. Defranne passed to senior Patrick Wagner, who used his head to push in JCD’s second goal, which led to a halftime score of 2-0. That score came just after a previous shot by the Eagles bounced off the goalpost in a near miss.

Wagner scored his second goal of the game in the opening minutes of the second half. Then, Defranne found the back of the net with a lob kick around the 27:00 minute mark. Junior Koldo Templado got in on the scoring action just four minutes later to give the Eagles a commanding, 5-0 lead that would hold until the final buzzer.

“We did a good job of spacing the field, passing the ball, and playing quickly,” JCD Head Coach Derek Jones said of his team’s sectional performance. “We were able to dictate the tempo of the game and play the game we wanted to have.”

Coach Jones commended his team for coming together and playing as a unit throughout the season, especially considering the squad added several new players this year through incoming freshmen and the school’s foreign exchange student program.

The Eagles are set to play North Posey in the first round of the Providence Class A regional. Their game, scheduled for Oct. 19 at 12:00 noon, follows the first game of that regional which features South Knox and Providence. The winners of those two openers face off in the final the same night at 7:00 p.m.

North Posey is currently 10-8-1 on the season, including the sectional tournament, compared to JCD’s record of 16-1-2. The Vikings are ranked 26th in Class A soccer via MaxPreps, compared to the Eagles’ ninth place rank.

“If we can continue to put pressure on teams like we did in the sectional, I think we’ll have a really good chance,” Coach Jones said of the team’s upcoming games.

Jac-Cen-Del defeated the Rising Sun Shiners in the sectional semifinal round by a score of 3-1. It was the third meeting between the two teams this year, with a 1-1 tie result in the Sep. 13 matchup, and an Eagles 5-1 victory back on Sep. 23.

Rising Sun earned a spot in the semis by defeating Milan in the opening round by a score of 5-3 in overtime.

In the semifinal game, Jacob Jines struck around the halfway mark of the first half with a goal assisted by Ryan Wilson. Tim Defranne added a goal just seven minutes later. After that, Koldo Templado’s corner kick was placed in a gaggle of both JCD and RS players, with the ball appearing to bounce off of a Shiners defender and into the goal. The game went to the half at 3-0.

Most of the second half passed by scoreless, until Defranne earned his second goal of the night with about eight minutes remaining. Rising Sun notched their only goal with just under five minutes left to play.

The Eagles faced cross-county rival South Ripley in the opening round of the sectional. JCD was fresh off of a win over the Raiders on Oct. 4 by a score of 3-1. Before that, the Eagles won another 3-1 match over SR in a game on Sep. 16.

SR’s two goals also came in the first half, one by Zach Gentile and one by Cory Ralston.

The 3-2 halftime score held through the final 40 minutes of the game until the final siren.