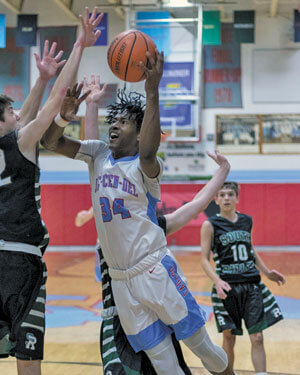 
Eagles forward Brandon Baber drives the lane in the first half of the rivalry game against visiting South Ripley. Baber led his team with 15 points, which included late-game free throws that helped his team stay alive in regulation and then maintain a lead in overtime.

Jac-Cen-Del brought a three-game winning streak into the match, which was to be the final regular season game for both teams. The Eagles had defeated Switzerland County, South Decatur, and Lawrenceburg in succession leading up to the game. South Ripley entered looking to break a two-game losing slide, having fallen to Rising Sun and Greensburg in their most recent matches.

As many fans expected, the game was neck-and-neck for most of the night. The largest lead in the first half was four points for South Ripley, which came early in the first quarter. At the end of eight minutes, the score was tied at 10, and at the halftime break, South Ripley held a two point, 23-21 lead.

The third quarter opened with more of the same close, back-and-forth play. The game was tied at 31 apiece with 45 seconds remaining in the quarter, and South Ripley decided to stall out for a final shot attempt. With 12 seconds on the clock, freshman point guard Zach Gentile initiated the offense. A couple of passes saw no breaks occurring in JCD’s defense. With the clock running out, Raiders forward Bryce Franklin launched a long-range three pointer that swished through the net to give his team the advantage heading into the final eight minutes of play.

Almost as soon as the fourth quarter began, Franklin was sent to the foul line where he hit two shots. Then, just seconds after that, he drained another three pointer to cap off his own 8-0 scoring run. Wanting in on the action, Raiders guard Cody Samples followed Franklin’s three pointer with one of his own, and in just over one-minute of game-play, the Raiders built an 11 point lead.

The scoreboard read 44-34 in favor of the green and black squad with just over five minutes to play. Eagles forward Brandon Baber scored six straight points over the course of the next minute to help his team pull back to four points with four minutes to play.

Both teams traded big scores down the stretch. For the Raiders, Zach Gentile and Cody Samples hit bonus free throws to keep their team ahead, while JCD’s Will Neal and Caleb Simon both hit late three pointers to continue to close the gap on the scoreboard.

With 5.6 seconds remaining, Jac-Cen-Del trailed 55-54, and tossed an in-bounds pass to Brandon Baber. He was fouled on the ensuing shot attempt, which sent him to the line with a chance to possibly tie or win the game. Baber missed his first shot, but hit his second for the tie. With one final defensive effort, the Eagles kept the Raiders from a good last-chance look, and the game headed to overtime tied at 55.

The Raiders built an early four point lead in overtime, before JCD’s Wyatt Day hit a three-pointer to get his team close again. About mid-way through the four minute period, Brandon Baber hit two free throws to give his team a one-point advantage. Following those shots, a JCD steal turned into a layup for Will Neal, and the Eagles were up three points with about a minute and a half remaining.

Cody Samples tied up the game at 62 points with another three pointer with just over a minute to play, his third of the game. TJ Menchhofer responded by hitting an inside jump shot to once again give JCD a two-point advantage.

With about fifteen seconds left to play and down two-points, Cody Samples again came up big for his team by tying up the game with a driving field goal. With the clock ticking down below eight seconds, Brandon Baber answered with two points. South Ripley hoisted a long-range last-second effort that did not find the hoop, and the buzzer rang with the Eagles on top 66-64.

After the game, JCD Head Coach Travis Stangland shared how proud he was of his kids for hitting big shots down the stretch. He also acknowledged that South Ripley had an answer to each score. “We were just able to make one more play at the end,” he said of the finish.

Stangland noted that he thought about calling a final timeout after Cody Samples hit the three pointer to tie the game at 62 points apiece, but decided to let his kids play through it since they knew what defense South Ripley was playing at the time. A timeout could have backfired if the Raiders shifted their defensive strategy in the huddle.

“That was a lot of fun,” Stangland said. “That’s what Jac-Cen-Del and South Ripley is all about.”