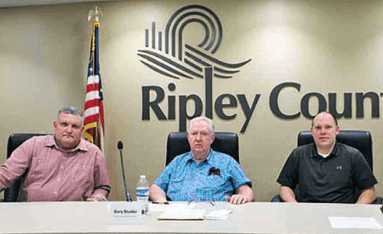 
Pictured from left: Rodney Stratton was voted to be the president for the commissioners for 2019; Gary Stutler; and newcomer to the commissioners, Mark Horstman, who formerly served on the county council.

At the first meeting of the new year for Ripley County Commissioners, Rodney Stratton was voted as president, and Amy Copeland, serving as auditor, will now be taking minutes of the meetings. Mark Horstman took his place as the newly elected commissioner, with Gary Stutler, rounding out the board. Attorney John Ertel was also in attendance.

Scott Huffman, director of Ripley County Emergency Medical Service, was in attendance and addressed the commissioners. He gave stats on runs, costs, etc. and backed it up with paperwork submitted. He also submitted a contract with the billing company for the county, Medicount. Commissioners accepted the contract from Medicount for 2019 that included a .25% increase to the billing company.

The commissioners were pleased that Medicount reported Ripley County as being in the top five percent for collecting payments. Commissioners discussed the possibility of EMS having their own tank for gas through the county. Right now they fill part of the vehicles from Kelly’s Bulk Plant in Milan, and part of them from a tank the county owns. Commissioners asked for additional paperwork to see how it would shake out if they had all the fuel coming from one source. They asked Huffman for his input, and he told them whatever their decision was would be fine with him. They didn’t make a decision at the meeting, but were just looking at ways to make things simpler and more cost efficient for the county.

Huffman reported that EMS has received grant money from the Rising Sun Regional Foundation in the amount of $20,000 for a vehicle for paramedics. He noted that the cost for one truck is $34,000. He said they will need to also purchase another vehicle. The two new vehicles, will replace the oldest vehicles they have in the fleet. Huffman noted that since all the changes last year, with Milan being their primary residence, they have brought in $50,000 more than they spent in 2018.

It was noted at the meeting that Rescue 69 was in breach of their contract with the county due to not being certified through the state for a period of time recently. When commissioners asked the time frame that Rescue 69 was without certification, Huffman noted that he learned about it the first week of December. Rescue 69 was told by the State on December 19 they were no longer certified and needed to cease operations until the certification was renewed. During that time, while they were getting certified, Huffman put an EMS unit in Delaware to cover the area Rescue 69 serves. It is important to note that the county was covered with a paramedic ambulance during this time.

The lack of certification concerned the commissioners who said they would look into the situation. Attorney Ertel said their (Rescue 69) check from the county could be affected from the lack of certification. He said he wasn’t sure the county could pay for that period of time since the contract was breached. “There has to be some level of accountability,” noted Horstman, as he listened to the dilemma.

Rescue 69 is a contracted EMS service by the county. It is a separate entity that takes care of approximately 55% of the county, per their contract.

The commissioners will meet again on Monday, January 14 for their regular meeting, which now starts at 8:00 a.m. at the courthouse annex in Versailles.