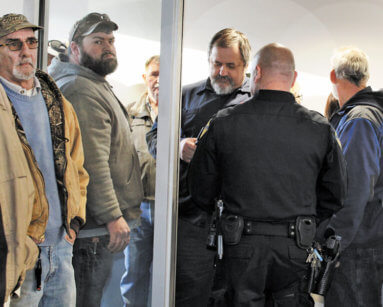 
Deputy Marshal Ed Rodriquez stood in the door when the capacity was full at the Versailles Fire Protection Territory meeting Tuesday evening. Some of those wanting to get into the hearing didn’t live in the affected township or town.

The township board consists of Carrie McNew, Dennis Sanders and Marilyn Hunt. They all voted against the proposal in a meeting directly following the hearing that was held. It was announced that a public meeting was being held, but the people were so “worked up” they began talking loudly and walking out while the meeting was being conducted. For the proposal to pass, it had to have at least two members from the township board and two members from the Versailles Town Board to vote “yes”.

The Johnson Township Advisory Board voted down the Fire Protection Territory that was proposed for the Versailles Volunteer Fire Department at the final hearing held March 26. This would have provided consistent funding for the fire department and would have also raised property taxes for people in Johnson Township and Versailles.  The trustee, Toni Halcomb, did not have a vote in the matter according to state statute.

“As chief of the Versailles Volunteer Fire Department, I would like to first thank our volunteers,” Chief Ben Sieverding noted. He told The Versailles Republican, “The Versailles and Johnson Township communities are blessed with a large number of trained volunteers that are willing to donate their time and efforts in the service of others. I am very disappointed in the short sightedness of the Johnson Township Board as shown by their vote against the Fire Territory last night. The board missed a chance to fix a serious problem our community faces.”

The Chief continued, “Our volunteers respond to far more emergency calls than any other volunteer fire department in the county and for the answer to be ‘they must do more’ is ridiculous. The comment ‘we appreciate what you do’ was heard throughout the hearing process, but it was hollow and empty as shown by the lack of real support for our volunteer firefighters as most of the comments in the hearing were attacks directed towards these volunteers and the fire department.”

“The Township Board had a very tough decision to make. We understand the need for fire servces and truly do appreciate the volunteers and their countless hours of service. However, the board also felt they needed to listen to the many concerns of the citizens. Those most affected by the tax would be those living outside of the town limits, farmers and larger property owners. From this point we will all need to communicate and pull together as a community to help raise support for the fire department,” noted Toni Halcomb, Johnson Township Trustee.

A large crowd gathered at the Versailles Town Hall for the third hearing with many of the same questions and complaints as they had expressed in the first two meetings. This time when the building was at capacity, people on the outside were demanding they be let in and said it was against the law for them to be kept out of the public hearing. Deputy Town Marshal Ed Rodriquez stood at the entrance door and Larry Eaton, attorney for the town, told them it was not against the law. You could hear the group talking loudly and yelling above what was trying to take place on the inside of the building. Roxanne Meyer, who was presiding over the hearing, couldn’t be heard at one point. Additional police (at least three deputies from the sheriff’s department) arrived at the meeting to help keep the peace.

One of the persons talking the loudest was finally allowed entry and he wasn’t even from Johnson Township or Versailles, the two entities who would have been affected by the proposed tax levy.

Even though the Fire Protection Territory had been advertised in the local newspaper as required by law, and mention of the proposal had been in town board meetings for nearly a year, people still complained and said they didn’t know anything about it until just a few weeks ago.

At the beginning of the meeting, Meyer asked the crowd for their input for ways to help the fire department should the Fire Protection Territory be voted down.  She also asked for civility and respect. At times, she had to reiterate that request throughout the hearing. Some gave suggestions and how people would be willing to help. They seemed to be willing to do fundraisers and volunteer to make sure their taxes wouldn’t be raised. She wrote every name down and assured them she would be calling on them for the help they promised.

The fact that the Fire Protection Territory would give consistent funding to allow the department to reach out for grants and have that matching money that is required, seemed lost on most people. They didn’t seem to understand the need for consistent funding beyond what the fire department brings in now, which is well below their budget, leaving them scrambling after grants, and hoping donations will cover the costs.

Meyer noted that she didn’t feel it was right for the firefighters to have to hold fundraisers after they have already volunteered thousands of hours of time to save others. “They are volunteers,” she noted. She urged the community to come together on the issue.

Karen Sieverding, wife of Chief Sieverding, stood and said she wanted to go on the record as someone who wanted the Fire Protection Territory. She said she is willing to pay additional taxes.  She could see the need, maybe because she is on the inside looking out and has lived the life of a fireman’s wife for nearly 30 years. She knows the sacrifice it puts on every firefighter’s family.

Many in the crowd thanked the firefighters, who were in full force at the meeting dressed in their “blues”, but they just didn’t want or felt they couldn’t afford to pay extra taxes. Some came from ladies who are widowed and live on a fixed income, others just working people who said they couldn’t afford it.

Larry Eaton, attorney for the town, stood and told the crowd he knew some of them were successful businessmen and farmers. He urged them all to think about what the consequences would be and the impact on the fire department.  He just asked for everyone to really think about how serious the situation is.

Chief Sieverding said the problem will not go away and if it isn’t addressed will only get worse. “The Versailles Volunteer Fire Department cannot maintain the current level of service at the current funding levels. We cannot promise that our current ISO Rating will be maintained during the next audit process. If this rating is lost, there will be a significant property insurance increase to the business owners and residents of our community.”

The Fire Protection Territory for Versailles is not an issue now. The next step will be what the people are truly willing to do to help.