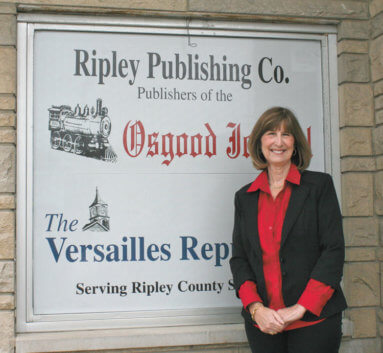 
Linda Chandler stands beside a familiar sign, a place she has worked for more than 39 years - Ripley Publishing Company in Versailles.

“I am so privileged to have been able to guide this paper into the 21st Century,” Linda Chandler, publisher of the Osgood Journal and The Versailles Republican said, as she prepares to make her exit at the end of the year into retirement.

Over the past 39 years, Chandler has seen the newspapers evolve. From typing stories on manual and electric typewriters, to designing the complete newspapers digitally – the industry has changed drastically.

Little did Chandler know when she applied for a position in the front office, that she would gain a career in the newspaper business and one day become the Publisher. She loved the work and jumped in gaining a quick understanding and passion for the business, learning all aspects of it.

Under the guidance of Chandler the paper underwent major changes to bring it into the digital age. Some of these milestone accomplishments include printing the paper in color, an electronic edition of the newspaper, along with a recently updated website. The newspaper has taken many turns and changes over the past four decades, but one thing remains the same, “It continues to tell the stories of the people and report the news through honest and unbiased journalism,” stated Chandler.

“It’s been an honor to be the steward of the newspapers that have served this community for over 160 years. It’s been a wonderful career,” Chandler said. “I have and am working with some of the most talented, community minded, and dedicated people you would ever want to work with. “I am grateful to my staff and the owners of the newspaper, Gene and Jo Demaree, for the support they have given me throughout the years.”

“I want to congratulate Linda on her retirement from Ripley Publishing Company,” noted Gene Demaree, President of Ripley Publishing Company. He went on to say, “I want to wish Linda the best in her next chapter of life. I know it will be just the beginning for new life experiences in the future. When I think of Linda, I think of leadership and all the qualities she possesses – honesty, empathy, passion, and the ability to inspire others to maximize their potential. Thank you Linda for 39 plus great years,” he concluded.

The career has afforded Chandler many opportunities to be involved in numerous organizations in the community. She is a founding member of the Ripley County Chamber of Commerce where she has served on the board of directors since its inception. She was awarded Ripley County Businessperson of the Year.

Chandler also served on the Ripley County Community Foundation Board of Directors in its early years. “I am honored to have been a part of both RCCF and the Chamber,” she noted.

She served on the first recycling committee before Southeastern Indiana Recycling District was formed. She was one of the first women to be installed as a Versailles Lions Club member, where she still serves today. Her voice is heard every Versailles Pumpkin Show as she announces the parade. She is also involved in a lot of behind the scenes work as a volunteer, is a member of Tri Kappa and has served on the Hoosier State Press Association Board of Directors and the Hoosier State Press Foundation Board of Directors; she was president of both organizations. She has also won awards denoting her talent in writing and advertising promotions from the Hoosier State Press Association.

The Versailles Pumpkin Show has held a long tradition with Ripley Publishing and is a favorite of Chandler’s. She has enacted some additions to the Thursday night entertainment adding a Prince Contest to compliment the Princess Contest, a baking contest and a pie-eating contest. She was able to bring Taste of Home Cooking schools to the area for several years.

About retirement Chandler says, “It’s something I’ve been thinking about for a while.” She announced her decision in the late summer to her staff. “I’ll always be passionate about journalism, I will miss being a part of the everyday process of news as it happens, and of course I will miss my staff who have been like a second family to me.” She is looking forward to new challenges, pursuing other interests, adventures, and her love of traveling with friends and family. She will also be tending to her strawberries and bees, two things she is passionate about.

About the future of Ripley Publishing Co., Chandler says, “The newspaper is more important than ever for a community and I am leaving ours in good hands. Wanda Burnett, longtime editor of the Osgood Journal and The Versailles Republican will be taking the lead as Managing Editor. She has been my partner in this business for over 30 years and I know she is well equipped to take over its operations. She is backed by an experienced and talented staff and I am looking forward to seeing the great work they do.”

Chandler concluded, “The work has been satisfying and challenging, and I’ve loved it all. I am proud of the work we have done and grateful to have been of service to this community.”