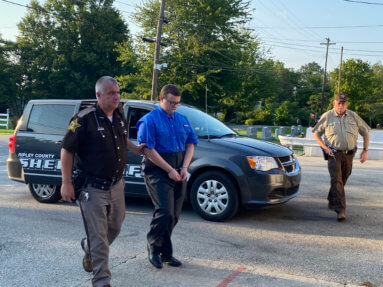 
Nickalas Kedrowitz was led by Ripley County Jail Commander Bob Curl, assisted by Deputy Randy Thieman, right, into the booking area at the Ripley County Jail. He had just been found guilty of murdering two toddlers Friday evening by a jury in Ripley County Circuit Court.

Kedrowitz had been charged with killing two siblings in the home in which he lived in Osgood that dated back to May 1, 2017 when the life of Desiree McCartney was snuffed out. Again, in July of 2017 first responders would testify they found themselves right back at the same residence for yet another child, Nathanial Ritz, who wasn’t quite a year old, whose life had also been taken by being smothered.

The jury would hear evidence from both the State and Defense last week with the State providing a solid case of murder. Defense tried to poke holes in the case and Det. Pete Tressler spent one entire day testifying. An expert doctor was flown in from Virginia for the defendant saying that perhaps his confession was false.
The mental state of the teenager was brought up multiple times, along with his IQ, which was stated to be around 68.

An interesting turn came on Thursday when Steven Ritz, father of one of the deceased children, and step-father to the defendant, was brought in to testify. However, he didn’t stay around long when it was made clear to him that anything he said in a sworn testimony could and would be used against him in any upcoming court proceedings. It seemed likely that charges concerning this very case are pending against Ritz. Prosecutor Ric Hertel assured Ritz the State would not grant him any type of immunity. He decided not to testify.

While Defense painted Kedrowitz as a struggling student, a teacher that taught him testified that he was learning Algebra, History, English, Earth Space Science and more all on track to get a high school diploma. She said Kedrowitz had read the James Patterson and Hunger Games series of books multiple times, along with hundreds of other books in their library.

In closing arguments on Friday morning, both the State and Defense had a chance to make one final plea to the jury. Prosecutor Hertel maintained his opening words of “actions have consequences.” He told the jury that the defendant’s response to a question “What has changed since Desiree has been gone?” was, “There’s less laundry.” The prosecutor noted that while there was no smoking gun or bloody knife, the weapons of choice in this case were a towel and blanket.

Mark Jones, attorney for Kedrowitz made a last plea for the jury to find reasonable doubt. He said this was a sad case and talked a lot about the defendant’s mental capacity. “Evidence suggests his testimony was false,” Jones said, continuing with “Nick fits all the categories of someone who would give a false confession (referring to the expert witness on false confessions). If you have a reasonable doubt, your verdict is not guilty.”

In the final argument, the State told the jury, “A bad home life is not an excuse to commit a crime.” Prosecutor Hertel noted that Steven Ritz will have his day in court in Ripley County, after he faces crimes in Jennings County. “He will have to face the music here,” he said. However, this was not about Ritz, but rather, Kedrowitz and his actions. He asked them to use their own life experiences, common sense, and rely on the experts in this case. They did and the guilty verdict came about six hours after they began deliberation.

The family of Desiree McCartney maintained a presence in the courtroom throughout the proceedings and said they are thankful for the prosecutor’s efforts throughout this situation that changed their lives forever. Gary McCartney, father of Desiree, noted that he only takes comfort in knowing his daughter’s organs were donated and many others are not only living, but thriving because of them. They also were thankful for the first responder firefighters who were passionate about trying to save this little girl’s life. “We have a lot of respect for these people, who are volunteers. They leave their homes and families to take care of ours,” Dustin McCartney, uncle of Desiree, noted.

Just as Gary stayed with his daughter until she took her last breath at the hospital, he has stayed with this trial and lived it for four years. There’s one more hurdle to cross – the sentencing of his daughter’s killer. With the grace and comfort of God, Gary says he will get through it all. He also has a teenage daughter, who has grieved for her sister.
Kedrowitz will be sentenced on November 1 at 1 p.m. in Ripley Circuit Court by Judge Ryan King.

Prosecutor Hertel was assisted by his team that included Rae Luehrson and Ryan Marshall, both deputy prosecutors. Hertel said he was proud of his team and commended them for their exemplary work.