Holiday Affair on the Square enjoyed 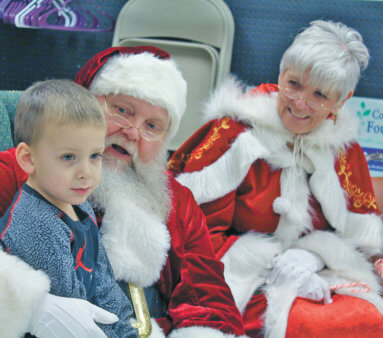 
Pictured above Garrett Benham, 3, son of Lori Peetz and Alex Benham, was very good as he sat on Santa’s lap.

The Holiday Affair on the Square event went off without a hitch Saturday evening, December 7. There were people singing carols on one side of the square in Versailles, and a brass quartet playing music on the other side. The South Ripley Show Choir sang songs of the season under the direction of Kris Lafary and a community caroling group also sang.

Santa and Mrs. Claus took up their places inside the Versailles Lions Club building where children could have their faces painted or do some coloring. Santa was a main attraction with many children coming to have their pictures taken and tell the jolly ‘ol elf what they wanted for Christmas.

The town hall was alive with free games for kids, crafts, along with a make and take snack. A train ride (made out of barrels) was available for the children to enjoy outside. This was provided by the Shelby Christian Church.

G.H. Coffee Shop was full most of the evening as people tried to get something warm to drink.

An outdoor live nativity was displayed with people of area churches playing the roles. Many were from the Church on the Rock. The nativity was sponsored by the Ripley County Ministerial Association. You could also pick up free hot chocolate by the nativity.

The Holiday Light Parade lit up the night as the Versailles Volunteer Fire/Rescue led the parade that finished up with another vehicle from the fire department pulling the sleigh with Santa and Mrs. Claus. The Christmas tree located by the town hall was ceremoniously lit with the crowd clapping.

For the first time, a Tree Decorating Contest was held. Various businesses placed a Christmas tree in buildings around the square that not only made the square look festive, but were voted on to see who would win first, second and third prizes.

Main Street Versailles initiated the evening that they are hoping will grow each year.