Holton covered bridge to be repaired 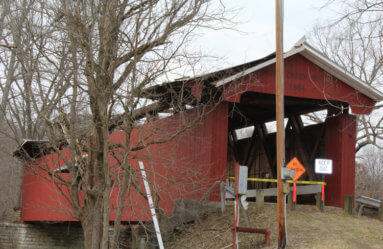 Among several topics discussed and business attended to at the May 20 meeting of the Ripley County Council, many citizens present were most concerned about appropriating funds for the repair of the historic covered bridge in Otter Creek Township.

The matter had been tabled previously, leaving citizens worried that the council might not fully appreciate the importance of the bridge to the culture of the county, as it is listed on the National Register of Historic Places.

The council voted unanimously to approve two appropriations: One amount for $22,400 which will help cover the $25,000 insurance deductible from the wind and storm damage to the bridge, and $10,000 to help cover said deductible as well as additional money that is not covered by insurance.

Ray Toops, Ripley County Highway Department, first spoke to the council regarding the bridge. Councilman Ron Decker asked Toops if engineers had inspected the bottom of the bridge. Toops said it had been inspected, and that the bottom and sides were both found to be structurally sound. Toops shared that roofers may start as early as this week on repairs.

Council President Brenda Wetzler asked Toops if he had explored other funding options, like grants, to help cover costs. Toops said that INDOT’s Historical Society had nothing currently available, and neither did Indiana Landmarks. Wetzler thanked Toops for looking into those options in the hope of saving taxpayers money.

Representing the Ripley County Historical Society, as well as Otter Creek Township, Mike Stratton reiterated the historic importance of the bridge, being 135 years old. Stratton shared that there used to be seven covered bridges in the county, and now only two remain.

Stratton asked for an explanation as to the process of the repair. It was explained that the money appropriated would come out of the highway department’s covered bridge fund and the cumulative bridge account. Toops shared that as for the actual repair, rough cuts of lumber will be used for the rafters. A ridge cap board will also be installed through the center in order to strengthen the roof. This step was not taken in 1998, which was the last time the bridge was repaired. With that board in place, Toops said the roof will be stronger than before.

President Wetzler pitched the idea that a group such as the historical society, or other related organization, could hold a covered bridge festival in the county in order to raise money to continue to keep the two bridges in fine shape for years to come. Stratton agreed this was a good idea, although it would take extensive planning.

Speaking last regarding the bridge, Cheryl Corning of Osgood told the council that she applauded the decision to put it back in the way that it was. She also stated that she appreciated President Wetzler’s comment about having a festival. She shared that there is a lovely stone bridge near her home, and she knew of other stone bridges in the county that might also be included in such an event.