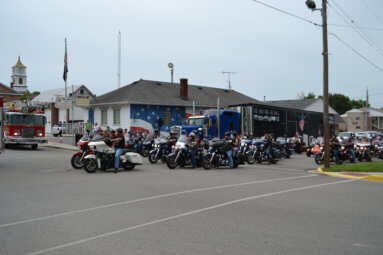 
Riders from across the Ohio River Valley region met in Versailles Tuesday to escort The Wall That Heals to Harrison, Ohio, for its sixth stop of 26 scheduled this year across the country.

Roars from more than 150 motorcycles filled downtown Versailles Tuesday as riders from the Ohio River Valley region crowded onto Water Street outside the American Legion Post 173 to join an escort to help honor Vietnam War veterans.

The Wall That Heals is a replica of the Vietnam War Memorial in Washington, D.C. The display, which is one third the size of the original, travels around the country each year to help honor those who served in the Vietnam War. Several dozen Vietname Veterans were part of the escort to the wall’s next stop in Harrison, Ohio.

A police escort with officers on motorcycles from Lawrenceburg, Hamilton County, Ohio, and Cincinnati led the procession. The officers said they expected the ride to grow to around 300 bikes as they traveled along US 50 to their destination.

All funds raised during the tour benefit the Vietnam Veterans Memorial Fund, the founding organization of the wall in Washington, D.C.

The wall will be on display and open to the public at the J.T.M. plant in Harrison from June 10 through 2 p.m. on June 13.