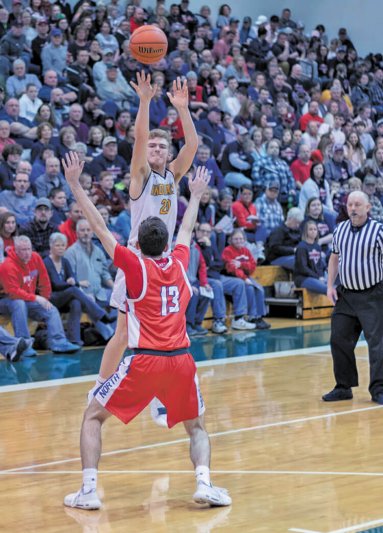 The Milan Indians won a semifinal thriller in the Class 2A Sectional 45 hosted at South Ripley High School on Friday, March 1. The game, played before a packed house, saw Milan mount a late run to take and hold on to one of their few leads of the night for victory.

The Indians entered the game at 14-11 versus the Chargers record of 14-9. North Decatur won the single matchup between the two teams played in Milan on November 24 by a score of 74-63. North Decatur held a slightly higher class ranking coming into the match at 42 versus 56 for Milan (MaxPreps database).

Joel Norman opened the game for Milan by hitting a three point shot. A field goal by Orrin Schmidt gave Milan an early 5-2 lead. The Chargers, however, began working the ball on offense to get good looks both down low and from three point range. The quarter ended at 14-10 in favor of the red and blue team.

Joel Norman again started the next quarter off for his team by hitting both a two point and three point field goal. The Chargers had an answer for each of those scores, and at the 5:21 mark, they led 24-17. Milan’s Peyton Wert chipped into the lead with a free throw, followed by a steal and a layup. Then, guard Damon Ward hit two shots for five points which tied the game at 27 late in the quarter. The game went to the halftime break at 30-27 in favor of the Chargers.

As was his pattern, Joel Norman opened the third quarter for Milan with two points. After a defensive stop, Orrin Schmidt was sent to the line for two shots. He tied the game with the first one at 30 apiece, and then gave his team their first lead since early in the first quarter with the second shot, 31-30. The two teams traded scores over the next few minutes. Ultimately, though, strong offensive rebounding on the part of the Chargers helped them end the quarter up by eight points, 49-41.

Scores by Peyton Wert and Carsyn Ascherman helped Milan pull back within two points by the midway point of the final quarter. Then, a banked in three pointer by Wert from the top of the key gave Milan a one point, 50-49 lead. Joel Norman followed that with a field goal to give his team a 52-49 advantage at the 2:33 mark. Norman’s score topped off an 11-point run for the Indians, and almost a six minute drought for the Chargers.

Both teams traded a few free throws on their next possessions, and then North Decatur’s Garrett Metz hit a three pointer just under two minutes to pull back within one point, 54-53. After a turnover by both teams, Milan worked their offense from the 1:30 mark down to 56.7 seconds looking for an open shot. They didn’t find one, but the Chargers sent Matt Riehle to the line for a one-and-one bonus shot. Riehle missed, and the Chargers grabbed the rebound and ran down the court for a layup at 38.3 seconds, which gave them the one point, 55-54 advantage.

With 24 seconds remaining, Orrin Schmidt got the ball down low and hit an inside shot to give his team a 56-55 lead. North Decatur brought the ball up the court and called timeout at 18.3 seconds. After in bounding the ball, they called another timeout at 13.7 seconds. Coming off of that break, Milan played strong defense, and then used up a foul they had to give at 2.1 seconds. North Decatur called yet another timeout in hopes of concocting a last-second effort, but ultimately, the Milan defense held and no good look was afforded to the Chargers as time expired.