Indians fight to the finish, fall 21-20 to Chargers 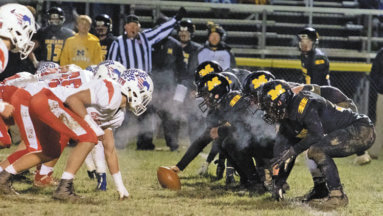 
Milan and North Decatur line up, muddy and cold, late in the sectional final game on Friday, November 8. Although Milan was defeated, they should be commended on their hustle and effort. The team led 14-7 early, but found themselves down in the fourth quarter. They fought back to score a late touchdown to pull within one point.

The Milan Indians entered their sectional final game on Friday, November 8 with high hopes of redemption against conference foes the North Decatur Chargers. The Indians and Chargers first competed back on September 20, when North Decatur routed Milan by a score of 21-0.

Junior running back Cole Steele wasted no time making sure another shutout didn’t occur in Friday’s game, as he broke loose for a 53-yard touchdown run on just the second play of the game to immediately give his team a 6-0 lead.

The Chargers displayed a fine ability to pass and catch throughout the night, continually vexing Milan’s secondary for big gains. The visitors enjoyed their first trip to the endzone on a pass from quarterback Alex Stirn to Noah Howell for 37 yards midway through the first quarter.

Both teams went on to trade stalled offensive drives continuing into the second quarter. At the 4:04 mark, Milan QB Peyton Wert found Carsyn Ascherman for a 34-yard reception for their team’s second score. With the extra point from Ethan Kaulig, Milan took a 14-7 lead to the halftime break.

The Chargers evened the score midway through the third quarter with a 51-yard reception to Logan Koehne. Then, the blue and red squad took the lead early in the fourth quarter when Koehne ran for a one-yard score.

Both teams again traded possession thanks to strong defensive efforts. With 4:32 remaining in the game, Milan was faced with a fourth and 15 attempt deep in their own territory. Facing elimination, the Indians went for the first down, and QB Wert let a pass fly to Adam Norman, who was sprinting down his team’s sideline. Norman hauled in the catch and ran for extra yardage, keeping the Indians’ dreams alive. Building off of that momentum, Wert found Ascherman on the next play for a 15-yard touchdown catch to bring the game to a score of 21-20.

Kicker Kaulig lined up for the extra point after the score, and in a knee-buckling moment for Milan fans in attendance, Kaulig’s kick hit the left side of the goalpost and bounced across the post, without going through, to leave the Indians trailing by one point.

Milan’s defense went on to hold North Decatur short of a much-needed first down on the following drive, and the Indians took over the ball again with just under three minutes left in the game.

Using time outs, Milan marched down the field before QB Wert was sacked on a third and eight play that brought the clock down to under 30 seconds.

Out of time outs, the Indians rushed to set up a field goal attempt on fourth down. The Chargers defense broke through Milan’s offensive line and blocked the kick just as Kaulig made contact with the ball. The ball never left the ground and Milan’s dreams were dashed as the Chargers offense took a knee to let the final 11 seconds tick off of the clock.

The Indians finish the season with a 9-3 record, 4-1 in the Mid-Indiana Football Conference. Despite the final loss, the Indians should be recognized on a fine season with plenty of highlight moments and successes.

The Chargers improved to 11-1 with the sectional win, their first sectional championship since 1998 and third in school history (1982). They move on to face West Washington in the regional, to be played at WWHS on Friday, November 15. The Senators are also 11-1 on their season.