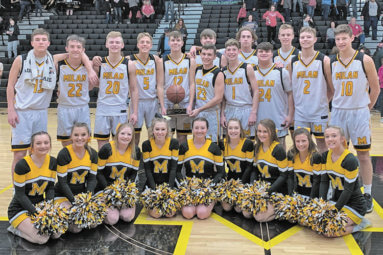 
Not only are they looking to claim conference honors, Milan’s 2019-20 team will also retain Ripley Publishing Company’s Pride trophy for another year. The Indians began the year with the hardware and kept it while defeating South Ripley 54-61 on January 24 and JCD over the weekend. The Pride trophy, born from the VIC Lion of day’s past, is on the line in all games between JCD, Milan, and SR.

The Milan Indians boys varsity basketball team is guaranteed at least a share of the 2019-20 Ohio River Valley Conference championship after defeating Jac-Cen-Del’s Eagles by 11 points in Milan on Saturday, February 22.

To claim outright conference dominance, the Indians will have to defeat the visiting Shawe Memorial Hilltoppers tonight, Tuesday, Feb. 25. The Hilltoppers enter the game 9-12 overall and 1-4 in the ORVC. Milan enters 14-9 overall and 5-0 in conference play. The Indians are currently riding high on a five game winning streak, four of those victories being over conference opponents.

Prior to the Milan – JCD matchup, the conference outcome wasn’t quite as clear. The Eagles entered the game 4-0 in ORVC play with wins over Rising Sun and Switzerland County last week (story below). The South Ripley Raiders were still in the mix, too, having defeated Rising Sun on Friday night and improving to 4-1 in the conference.

Now, Milan plays for the crown. Should an upset at the hands of Shawe occur, Jac-Cen-Del and South Ripley will duke it out for a tie when they bring their identical 4-1 records into their final game of the season this Friday, Feb. 28 in Versailles.

Jac-Cen-Del arrived to Milan on Saturday night enjoying a four-game winning streak. The Indians scored first off of the opening tip and led the entire game, although things got interesting in the second half as the Eagles made a great run.

Turnovers plagued both teams early as they tried to create an offensive rhythm. Milan pushed the pace in the first quarter and had success under the basket, while the Eagles opened up with three-pointers by Christian Comer and Justin Ohlmansiek. JCD shot well from outside all game.

Milan’s shooters heated up later in the first and into the second quarter, with Adam Norman and Peyton Wert connecting on long shots.

Those scores helped the Indians build a double-digit lead by the midway point of the second quarter. The game went to halftime with Milan on top by 13. Wert racked up 20 of his 28 points in the first half.

JCD Coach Jack Day must have given a stellar halftime pep talk, as the Eagles wore out the nylon in the third quarter. The run started with two free throws by Justin Baber and a three pointer by Comer. By the time the quarter ended, Cameron Gehl and Ohlmansiek had both drained two, three-pointers apiece, and Will Neal added one of his own.

The Eagles pulled within five points at the five minute mark of the third quarter and pulled to just three points back by the end.

With about three minutes remaining, though, the Indians were back on the hunt. They forced several consecutive steals with their own strong defense and turned each into a fastbreak layup. Within the blink of an eye their lead was back to double-digits and they stalled out the clock for victory.

Both teams had three players score double figures: Wert, Norman, and Clark for Milan and Day, Ohlmansiek, and Gehl for JCD. Wert shot an impressive 11-12 from the free throw line. Day and Ohlmansiek each hit four three-pointers apiece.

It was Milan’s second win over JCD this season, having defeated the Eagles 88-66 to open the Ripley County Tourney back in January. With the win, the Indians retain Ripley Publishing Company’s Pride trophy, on the line in all games between Milan, JCD, and South Ripley. The hardware will rest in Milan’s trophy case for the second year in a row.