Indians rack up 543 yards on offense, rout Rushville in week one 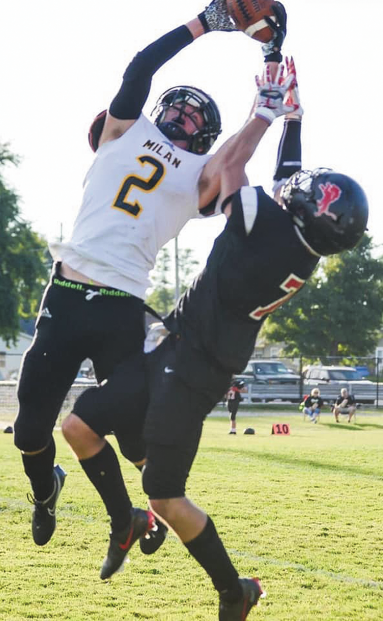 
Milan´s #3 Adam Norman makes the leap to pick off a Rushville pass against wide receiver Jake Vance. Norman recorded the interception and had three touchdowns with 152 receiving yards in the game.

Milan scored twice in the opening quarter and unloaded its vast arsenal on offense en route to a 48-26 season opening win at Rushville on Friday night.
The victory saw the fourth most points put up by a Milan football team on opening night in the last 25 years. Outside of a stretch in the second quarter, the Indians were never threatened and pulled away from the Lions by halftime.

Milan led 14-0 after the first quarter on a one-yard run by Peyton Wert and a 10-yard scamper by Cole Steele that were both followed by Ethan Kaulig extra points.The Indians saw their lead trimmed to 14-12 on a pair of Rushville touchdowns in a nine minute stretch in the second frame but the Lions never mustered a big enough wall on defense to keep Milan at bay.

Logan Reed found the end zone on a 24-yard run that was followed by another Kaulig extra point with 2:25 remaining in the half. Wert went to the air on the final touchdown of the quarter with seconds remaining, connecting with Adam Norman on a 17-yard pass that put the Milan advantage back out to 27-12 at halftime.

Milan´s lead never ventured below 14 points in a second half that saw Steele run for a 19-yard score and Wert connect with Norman two more times including a 58-yard bomb that was the final score for the Indians with 5:33 left in the game. Rushville scored twice in the second half on a pair of touchdown passes from Austin Vance to Jake Vance.

The Indians racked up 543 yards of total offense with no turnovers, putting together a well-balanced attack that included 343 yards on the ground and 200 yards in the air.

Wert was 11-of-14 passing for 200 yards and three touchdowns that all found the hands of Norman who had seven catches for 152 yards. Wert, a senior, also had 148 yards on the ground on 16 carries with a score. Reed led the Milan rushing attack with 155 yards and two scores on 15 carries. Kaulig was 6-for-7 on extra points.

Rushville managed 375 yards of total offense but the Milan defense forced four Lion turnovers. Norman and Wert each had an interception with Wert also recovering a fumble in the game. Jonny Volk and Riley Johnson each picked up a fumble recovery and Chandler Reatherford was credited with a forced fumble alongside Alex Wenger. Johnson led the Milan defense with 11 tackles and Caiden Yorn had 10 tackles.

Milan (1-0) plays its 2020 home opener on Friday night when they look to defend bragging rights against Ripley County rival Batesville in the annual Bell Game.