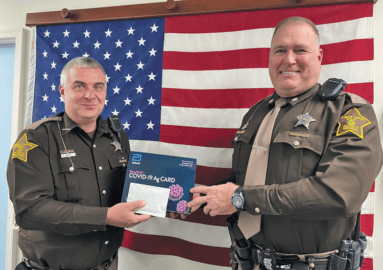 
Pictured above from left Ripley County Jail Commander Deputy Bob Curl, and Chief Deputy Kurt Enneking, right, hold the COVID-19 tests that are administered to inmates who are serving time in the Ripley County Jail. The results are available in just minutes, helping the officers keep a better idea of the medical shape of the inmate population during this pandemic.

The Ripley County Jail has not been immune to COVID-19 just like many of the jails and the prison system in the State of Indiana. The dreaded virus has those in charge scrambling to make sure they are as safe as possible, but in the end – some cases have occurred in the local jail, according to Sheriff Jeff Cumberworth.

When asked about a rumor that many inmates tested positive for COVID-19, Sheriff Cumberworth, along with Jail Commander Deputy Bob Curl, agreed. “There was a point where we had quite a few cases,” Deputy Curl agreed. He said that was in November.

The open dormitory style jail is a perfect breeding ground for a virus such as COVID-19. There isn’t much room for social distancing, etc. “There’s just no way of separating all the inmates,” noted Deputy Curl. They have three pods of 24 and one that holds 16, not including the female population.

“One inmate finished his time and was then tested after he got out of jail,” noted Sheriff Cumberworth. He said through contact tracing they were notified by the health department. “We had no complaints up to that time,” he continued. Dr. Kristen Dauss with the Indiana Department of Corrections had a conference call with Ripley County Health Department, the State Health Department and sheriff’s office to plan a strategy to help with the situation.

At that time 16 prisoners in one cellblock tested positive for COVID-19. Altogether there were 41 who were foun

d to be positive, but no one requiring hospitalization. The Ripley County Jail Nurse Lana Crow took care of the cases, according to the sheriff.

The last inmate who was in the group testing positive was released from “quarantine” last week on December 31, with Deputy Curl reporting there are no active cases as of now. “Of course that could change at any time,” he noted, saying they have a rapid test they can now give the inmates. The rapid test, which gives results in just a few minutes, is made by BinaxNow. It would be ideal to test everyone, but the testing is quite expensive. Those who present symptoms go to the nurse and then will be tested if needed. “We’re doing all we can do with what we have,” noted Deputy Curl.

Sheriff Cumberworth agreed, and said the inmate population in Ripley County has been monitored daily, and are tested for COVID-19 as needed. “We’re taking all precautions. Everything is cleaned, sanitized, all the proper PPE in place,” he assured the public.

Some people had been talking about inmates not being able to see the nurse as often as they would like. “Inmates are never denied medical treatment,” noted Sheriff Cumberworth. He said there is a charge that is taken out of each inmate’s commissary money, much like a co-pay would be. Of course there is no charge if the inmate is indigent. The process is for the inmate to use a kiosk inside the area (pod) where they are housed, to put in a request. They also order commissary product that way as well as using the law library, file grievances, or use the email to communicate with someone on the outside.

“We are doing everything we can during this time,” noted Sheriff Cumberworth. He said being in jail is a punishment, but people still have basic rights, and they strictly enforce that. “We do have fights and those offenders are charged,” noted Deputy Curl, who said, along with the sheriff, that the judges and prosecutor take jailhouse offenses seriously as do they.
A group that usually comes in called Christmas Behind Bars, could not be there this year due to COVID-19. “The inmates were disappointed,” noted the sheriff. But, they had a turkey meal with the trimmings at both Thanksgiving and Christmas.