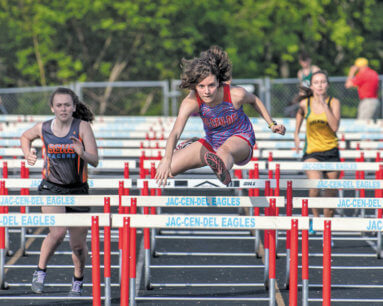 
Jac-Cen-Del’s Kayla Simon is pictured during the 100 hurdles, where she placed second. She zipped over the hurdles with an ease that belied the technical difficulty of the skill. Simon also won the 400 meter dash and placed fifth in the long jump.

The Jac-Cen-Del Eagles track and field athletes defended their “nest” for the final time at home this season on Tuesday, April 30. Both the boys and girls teams bested visitors from South Ripley, Switzerland County, and Shawe Memorial.

For the boys, JCD earned 88 points, compared to 56 for Switzerland County, 48 for South Ripley, and 22 for Shawe.

The varsity track and field season is winding down for local teams. Jac-Cen-Del, South Ripley, and Milan all competed at the Ripley County Meet on May 2 (with Batesville), and will compete in the ORVC Meet on May 7, before the sectionals.