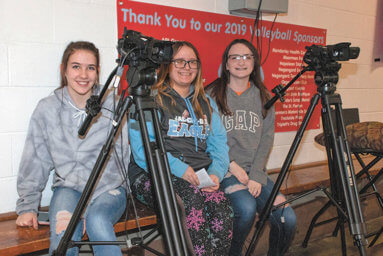 
Erica, Marissa, and Audri began setting up their cameras about an hour before the junior varsity game. Located at the top of the home crowd bleacher section, one of these cameras is used for the wide-angle view of the game while the other is used for close-up “hero” shots.

What began last year as an extracurricular project formed between Jac-Cen-Del (JCD) senior Trent Linville (Class of 2019) and superintendent Ryan Middleton has now grown into a class taken by 18 students at the high school. The Radio and TV class formed in January 2020 and is offered fully online through Google Classroom for the semester. Weekly assignments are sent and received through the web with the majority of the course grade being earned through participation. Plans are already in the works to host a physical class during the school day next year.

JCD technology assistant Darren Engleking was tapped to coordinate the new course, thanks to his degree in broadcasting. While he always thought he’d be the guy behind the scenes in a control room, he didn’t foresee teaching his skill to others. However, “Seeing the kids get excited about it,” fuels his drive to lead the blossoming program.

A crew of six students and two adults worked the home boys basketball game versus Rising Sun on Tuesday, February 18. The crew arrived an hour before the 6:00 p.m. junior varsity tip off to set up their gear and get connected.

Currently, home girls and boys basketball games are streamed using four cameras. Two are positioned on tripods at center-court at the top of the home side bleachers. One of these is used at a wide-angle and pans with the action. The other is used for “hero” shots, close-ups of players who have scored, fouled, or are substituting into the game. A microphone located in the same location is used as the main audio for the livestream.

Two more cameras, on rolling tripods, are set up on the gym floor under each basket. They provide the best angle for free throw shots.

In addition to four students working cameras, two enter player statistics into laptop computers. This data is then used by a student in the “character generator” (CG) role. The CG is responsible for updating the score and statistics that appear on-screen throughout the livestream. Joining the CG in the control room is one director who makes decisions regarding which camera is live at any given moment in addition to other organizational duties that make for a smooth viewing experience.

All of the equipment is hardwired from the gymnasium to the control room, which is on the opposite side of the hallway from the concession stand near the south entrance. Then, it is streamed to the web via the school WiFi.

Students say working the game is fun, but challenging. They’ve learned the difference between simply watching a basketball game and working it. Keeping their cameras focused on the fast-paced action is no small feat. Keeping their brains focused over the course of two games, which usually take a total of three to three and a half hours, increases the challenge to another level.

Students working cameras communicate via earpiece with the director in the control room, who tells them where to point and focus. The camera operators don’t know exactly when their camera is live, though, so they always have to be prepared to get “the shot” in the moment.

Statisticians and the CG must work quickly to gather and post on-screen figures. Then, there are details of a successful livestream that most people would never think about. For example, YouTube does not allow the group to stream or post copyrighted music in their videos. So, anytime a song plays through the gym’s speakers, like during timeouts and quarter breaks, the director must cut the audio and insert royalty-free music in its place.

Crew members have honed their skills through these challenges and currently create content deemed of high-enough quality to become an IHSAA approved broadcast.

“We have taken the show on the road,” high school principal Fred Unsicker says. The class received IHSAA approval to stream the girls sectional games at Waldron High School and the regional game at Southwestern-Shelbyville earlier this month. JCD joined a select few schools in the state that broadcast away games. Engleking says being an IHSAA partner means that highlights and replays from JCD tournament games have the potential to be distributed to statewide media partners.

Traveling brings with it both complications and extra fun. IHSAA partners are required to have commentary to accompany footage, so the crew grows by two on the road with one play-by-play commentator and one color commentator. All of the equipment, including wires and a 55-inch TV to use in the control room, have to be packed up and reset at the host site.

Despite the added logistics, students said going to the girls tourney games were some of the best experiences they’ve had since joining the class. Crew member Erica Starkey said she enjoyed bonding with her classmates. They went out to eat together and the atmosphere to and from the game was described as a “party bus.” The crew plans to continue their party at the boys sectional, also held at Southwestern-Shelbyville next week.

Engleking shared that about 450 people tuned into the livestream of the girls regional game, and over 2,300 have since viewed the recap online. Those numbers show an interest in away-game coverage, as around 100 or so viewers usually tune into home games.

There was some initial concern that streaming home games would lead to a decrease in attendance, but that has not been the case so far, as 2019-20 attendance is reportedly slightly higher than the previous season. Additionally, the streaming setup has attracted visitors from other schools who are interested in doing something similar.

Jac-Cen-Del sports fans, technology hobbyists, and the community at large are invited to follow the school’s YouTube account, “Jac-Cen-Del Schools,” to view live games and rewatch archived content. The class has a goal to double their subscribers by next year. The account currently has 451 and they would like to boost that number to over 1,000.

Engleking and his students have a lot of ideas on how to improve their broadcast and attract additional subscribers. They would love to procure additional grant funding to add and upgrade their equipment.

For example, viewers of college basketball games can likely envision the backboard camera view, often played during goaltending replays. Engleking said a GoPro style camera mounted behind the backboard in the JCDHS gym could provide a similar look.

Improving audio capabilities is also on his mind. With their microphone being located at the top of the bleachers, sometimes conversation levels drown out the game sounds. Choral style microphones suspended from the ceiling of the gym could possibly improve sound quality, as could microphones on the floor, which could pick up sounds of the bouncing ball and shoes on the court.

“The sky is the limit with this class,” volunteer Tony Starkey says. Beyond equipment, the class would like to expand its offerings to include additional spring and fall sports. They would also like to create content through community partnerships. That could include shooting videos for local businesses or organizations and also making commercials that run during their sports streams.

Engleking says he’s thankful for the support of the JCD administration that have helped promote the program to students and the community. In particular, he thanked Principal Unsicker, elementary school teacher Jake Todd, and community supporter AJ Ertel for their assistance this season. He also credits the work-ethic of his students, who show up early for setup, work through two games, and stay late to tear down the production. “It’s a big commitment,” he says of their time.

Principal Unsicker concurs, writing, “Our students are doing a great job of setting up and running the broadcasts.” As the class and its capabilities grow, Eagles fans from all over can follow their team online. Better yet, attend a game and take in all the sights and sounds. Beyond the action on-court, you’ll see students and adults alike finding their niche and pitching in to make the experience rewarding for their community.