Jail officer inside bars instead of outside 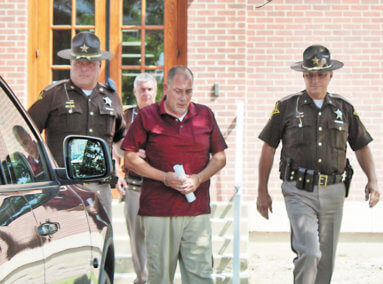 
Pictured in the red shirt is Darin Laird, a former Ripley County Jail Officer, who was sentenced on September 11 to serve two years in prison for trafficking with an inmate. He is flanked by Chief Deputy Sheriff Kurt Enneking, left, and Sheriff Jeff Cumberworth, right, with Ripley County Jail Commander, Bob Curl, behind him.

Darin Laird found himself on the other side of the law when he appeared in court on Wednesday, September 11.

Laird, 42, had served as a jailer three months for the Ripley County Jail, but when he broke the law by trafficking with an inmate, he was faced with jail time. Laird trafficked contraband (notes between a girlfriend to her jailhouse boyfriend) on at least two different occasions between February 16, 2019 and March 9, 2019.

At his sentencing hearing he said, “I made a bonehead mistake and I’m sorry I let you all down.” He was speaking to Sheriff Jeff Cumberworth, and the entire staff of jailers who were all in attendance at the sentencing.

Deputy Prosecutor Shane Tucker didn’t give Laird any slack when Tucker asked for the full amount for each offense – 1) Official Misconduct, a Level 6 Felony and 2) Trafficking with an Inmate, a Class A Misdemeanor, which amounted to 730 (two years) days in jail. Tucker argued that Laird’s dangerous actions not only put other jail officers at risk, but also the other inmates and the public at large. Further, Tucker urged the Court that because of the times this had occurred and the well thought out plan Laird initiated to traffic the contraband, justified an aggravated sentence.

Laird’s attorney John Dorenbush requested that the Court take into consideration that Laird had no additional criminal history and his employment history.

Judge Jeff Sharp agreed with the State and said Laird had broken the trust of the sheriff and the people of the county. He said that the inmates, jailers, police officers, administrators, and the general public had been put in jeopardy by the actions of Laird. He asked the defendant if he knew what was in the notes he passed from a girlfriend of an inmate. Laird said he did not know what was in the note, he assumed it was a love note. However, the judge didn’t buy that answer and also brought up the fact that Laird was given nude photos of the girl passing the note, Courtney Miller, who also has a felony record.

Court records say that Laird would meet Miller at a Versailles gas station and there she would give him notes to give to her boyfriend, Eric Schott, who is in jail.

Judge Sharp said, “You were fully aware that Miller could go see Schott. He noted that the jailer knew that she (Miller) could visit with her boyfriend, if in fact it was only to tell him she loved him.

The judge said he agreed no one in the criminal justice system has a tougher job than a jailer. He went over several reasons why it is such a hard job, including the low pay. However, he said Laird’s behavior was inexcusable. He went on to say anytime a crime is committed, people are a victim and it’s worse when committed by a correctional officer.

Laird said, “I made the worst mistake of my life.”

Sheriff Cumberworth told the Osgood Journal that Laird had indeed made the worst mistake of his life, and he will come down hard on any other jailer who makes the same decision. “It’s something I’m not going to tolerate,” he said. He noted there is another jailer that will be going to court soon concerning the same type of situation. “It’s disappointing. I go through the applications carefully, and they don’t have a criminal background, I just don’t understand why they would take the chance,” he noted. “I make it clear to them when they are hired that they cannot bring any type of contraband i.e. notes, cell phones, anything to an inmate. They agree they won’t and then this happens. It is disheartening.”

After the sentencing of Laird, all of the jail officers were brought together where the sheriff again told them they will face the same fate as Laird if they choose to bring contraband into the jail.

The sheriff noted that the day after the hearing Laird was taken to the Indiana Department of Corrections where he will serve his sentence.

In reference to Laird’s sentence, Prosecuting Attorney Ric Hertel stated, “Laird’s conduct was extremely dangerous and placed the safety and welfare of the other jail staff, inmates, law enforcement officers, and the community in jeopardy. Laird took advantage of the public’s trust by trafficking contraband to inmates while working as a jail officer. His conduct warrants the aggravated sentence he received.”