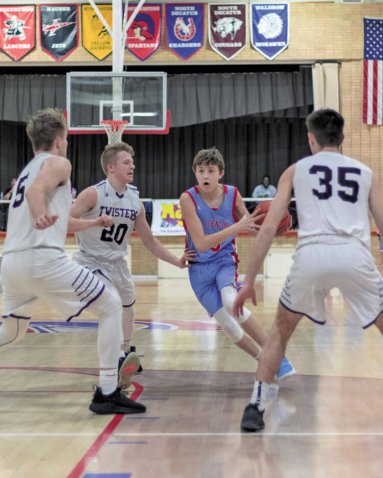 
Eagles freshman Wyatt Day led his team with 14 points, which included four three pointers. As a ball handler, Day is able to draw in double teams, which then allows him to dish the ball off to a teammate for an open shot.

The Jac-Cen-Del (JCD) Eagles varsity basketball team drew a tough opponent for their first round sectional game on Wednesday, February 27 in the Oldenburg Academy (OA) Twisters. The hot shooting Twisters entered the match at 15-5, ranked among the best Class A schools in the state, while JCD entered the game at 13-10, with the momentum of a three game winning streak behind them. They hoped to even up their season record against OA, who won a match between the two teams in Osgood on January 25 by a score of 43-31.

The Twisters built a 16-5 lead by the end of the first quarter thanks to hustle defense and good shooting. The Eagles offense got warmed up in the second quarter, with Justin Ohlmansiek, Wyatt Day, and Caleb Simon hitting shots to help bring the game back to a single digit margin. At 1:45 left in the half, Ohlmansiek hit his second three pointer of the quarter to pull within six points. Then, Caleb Simon followed with a three pointer to bring the game within three points. A defensive push in the last minute by the Eagles saw the 23-20 score hold into halftime.

JCD junior Brandon Baber opened the second half with an “and-one” play to tie the game. After another defensive stop, Baber hit two free throws to give the Eagles their first lead. By the end of the third, however, OA held a five point advantage, 41-36.

The Eagles weren’t ready to give up. Wyatt Day, Caleb Simon, and Will Neal all hit three pointers through the first half of the final quarter to keep the Eagles’ hopes alive. With Day’s second long-ball of the quarter with four minutes to play, JCD was able to briefly pull within one point, 51-50. The Twisters answered with a three pointer to go up 54-50 at the 3:25 mark. A steal and a layup out of a JCD timeout then gave the Twisters a six-point lead.

From there, OA looked to slow the game down and burn up clock, something they do well with their offensive ball movement. The Eagles used up the fouls they had to give, and then sent the Twisters to the line for bonus shots by the 1:25 mark.

With precise free throw shooting and ornery defense, the Twisters kept JCD from scoring again for the remainder of the game and advanced to the sectional semifinal with a 60-50 victory.

Scoring for JCD included: Wyatt Day 14, Justin Ohlmansiek 11, Brandon Baber 11, Caleb Simon eight, TJ Menchhofer three, and Will Neal three. The Eagles also hit 11 three pointers, with Wyatt Day connecting on four and Justin Ohlmansiek three. Brandon Baber was the only member of the team to shoot free throws, and he went a perfect seven for seven. The Eagles finish the 2018-19 season with a 13-11 record.