JCD girls build win streak to seven in a row 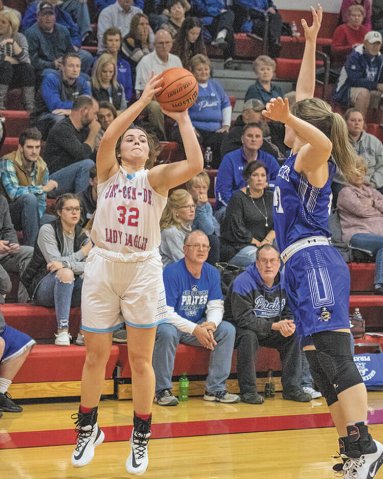 Jac-Cen-Del’s Lady Eagles basketball team defeated Hauser and South Dearborn last week to build their record to 7-1, with all seven wins coming in a row after their first game of the season.

Junior Paige Ledford led her team with a double-double effort of 17 points and 15 rebounds. Additionally, she had three assists, one steal, and two blocked shots.

JCD traveled to South Dearborn on Saturday, Dec. 7 and defeated the Lady Knights in a close game, 56-51.

The Lady Eagles led 24-18 at the half, but a 25-17 third quarter advantage by the Lady Knights put them ahead 43-41 with eight minutes remaining. The Lady Eagles outscored the home team by seven to take home the five-point victory.

Ledford lit up the scoreboard with 25 points on the night, to go along with 14 rebounds. Nineteen of those points came from the free throw line, resetting the school record for both free throws made and attempted in a single game.

The junior varsity Lady Eagles continued their stellar start to the season as well, defeating Hauser 54-23 and South Dearborn 43-25. Those two wins boosted their record to 7-1.

The Lady Eagles will carry their positive momentum into two games this week. On Tuesday, Dec. 10 they’ll visit class rivals Waldron. The last time those two teams met was in last year’s quintuple overtime sectional championship game, where JCD prevailed 67-61. The Lady Mohawks are 3-5 on their 2019-20 season so far.

Then, Morristown comes to Osgood on Saturday, Dec. 14. The Lady Yellowjackets are currently 2-5.