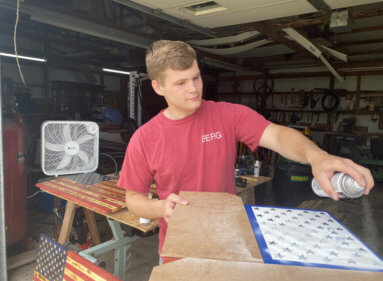 Making music or making flags, Chris Douglas, 21 of Holton, is comfortable doing either. The 2017 Jac-Cen-Del graduate made the decision to go to Taylor University, where he will be starting his senior year this fall. He said the university is known for its Christian values, and that’s what drew him to go there. “As a faith based person, it has meant a lot,” he told The Versailles Republican.

This summer Chris has been making wooden American flags. He starts with rough lumber, and the end result is ol’ Glory, complete with stars and stripes. Every piece is handcrafted and meticulously placed together, with a choice of carved stars or painted ones. “The carved stars take a little longer,” he noted.

There’s something about Chris that most people may not know if they just meet him once or twice. He has an eye disease called cone-rod dystrophy – meaning he doesn’t see nearly as well as others and will experience vision loss over time. Cone-rod dystrophy (CRD) is a group of inherited eye disorders that affect the light sensitive cells of the retina called the cones and rods. People with this condition experience vision loss over time as the cones and rods deteriorate.

According to Chris, he and his brother, Jackson, who attends Earlham College getting a degree in biology, both have the disease. He said when they were younger they went to the Indiana School for the Blind for a time, learning life coping skills. Initial signs and symptoms that usually occur in childhood may include decreased sharpness of vision and abnormal sensitivity to light. These signs are usually followed by blind spots in the central field of vision, loss of color perception, and loss of peripheral vision. Most people who have this condition are legally blind by mid adulthood.

The eye disease doesn’t get Chris down. He is living his full life, wearing contact lenses for now, and doing everything he can to enjoy life and make it better for those around him.

The flag project is something Chris is passionate about for a few reasons. One, he is able to work in his grandfather’s woodworking shop, cementing their already close bond. Jack and Linda Bustle, grandparents, just live across the street from his parents’ house. “I enjoy being with my grandpa,” Chris noted, saying they have always been close to both grandparents.

Grandson and grandfather share another passion – music. Jack is known for playing string instruments such as the bass and banjo. Chris said he was always around music and started playing by ‘ear’ when he was younger. Then when he went to school and took music/band, he was able to learn notes. He said he plays the bass and regular guitar and piano the most, but has knowledge and can play a little of every instrument. That’s good, because that’s what he is going to school for – to be a band/music teacher.

Chris will be interning this fall and then completing his senior year at Taylor University.  He has also been helping with the music program at the Holton Christian Church this summer. “That’s something I really enjoy,” he noted.

His parents, Jeff and Michelle Douglas, are proud of him. They are proud of all of their children. Besides the two boys, they have a daughter, Olivia, who as Chris put it “is a definite sports fan”. Everyone who knows her zest for life, knows she goes all out about sports and participates in the Special Olympics.

If you would like to purchase one of the flags Chris is making, they are available by going to his email at 1717cdouglas@gmail.com.