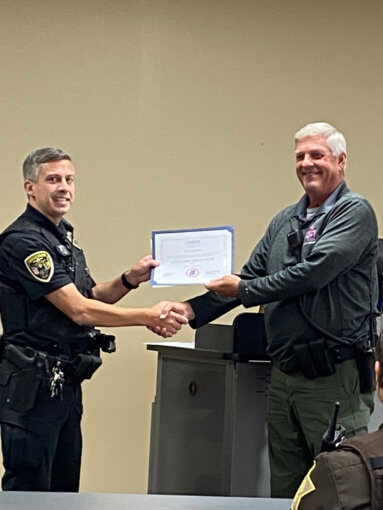 
Pictured at left, Officer Brian Potts gives Dan Goris the honor of being the School Resource Officer of the Year last week. Pictured below are some of the area officers who participated in the training at the Southeastern Career Center.

Putting their heads together, area School Resource Officers met last week to compare notes, learn from and encourage each other as they promote the safest school environment possible for students in the area.

Marshal noted that the center serves 11 school corporations and has 800 students with a 100% graduation rate. “We’ve got some good kids in southeastern Indiana,” he said.
Goris introduced State Representative Randy Frye, who is no stranger to law enforcement. He thanked the officers for what they do in the schools saying, “It’s a tough job…protecting our kids is a high priority.” Frye has co-authored a bill to make sure SRO’s receive the same line of duty death benefits that other officers now have. He noted that having armed officers in the schools “just makes sense” in the world we live, saying, “we need you all.” He said, “You have the respect of the General Assembly.”

The training event continued with a surprise for Goris when he was named School Resource Officer of the Year. Eric Kapczynski with the Columbus Police Department, was on hand to give out the Region 10 award. He thanked Goris for all his work with communication for the officers – many who are retired from other police careers and now serving in the schools. Goris served many years in a variety of capacities for the Indiana State Police – Versailles Post before retiring and going to JCD.

Also on hand to speak was Noel Houze, another retired Indiana State Police officer from the Versailles Post. He is now the SRO for Milan Schools. He talked about a program their school has in place that notifies surrounding school officers/all police officers within a certain area, about any school emergency.

The group is an entity of their own – working together to give the best possible safety to the schools they serve. Any ideas, gadgets, etc. they find to be effective, they share with others.
Jack Prarat with South Dearborn Schools, another retired officer, talked about the Halo devices for detecting vaping. He said his school has had great success with these saying, “Their reliability is great.”

The problem with students vaping, smoking, and using drugs through that avenue was discussed. Vaping takes the danger to a new level, often having illegal drugs in them – potentially laced with deadly drugs. The Halo devices are also used for emergency situations such as needed medical help, or a fight.

While some of the techniques used were not made public, the officers will continue to use every tool available to promote safety for students.