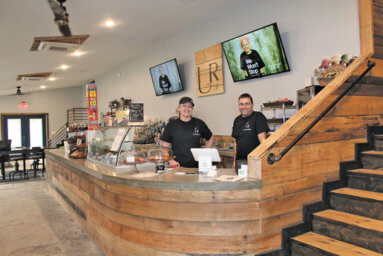 
The UR Café welcomes people to just come in and relax, have a cup of coffee, tea or maybe some great ice cream and donuts. Students find the cafe welcoming before and after school. It is located at 721 S. Tanglewood Road, Osgood and is open from 7 a.m. to 7 p.m. daily, except for Sunday. Pictured are Charlotte and Ken MacPhee, who run the Just for Him Impact Center that includes the UR Café and the Upper Room Fellowship.

The Just For Him Impact Center is doing just that – making an impact on the community of Osgood and beyond as they open their doors and hearts to the community at large. Ken and Charlotte MacPhee had the vision, but said they didn’t know they would land in Osgood, Indiana.

The MacPhees had traveled to many different states giving open-air concerts mostly appealing to young people. They are from near Orlando, FL, but when they came to Osgood and had a concert at the Fairgrounds Park, they stayed.

Those who saw the warehouse type building at 721 S. Tanglewood Road, Osgood, could never imagine it would one day be a mission.

The MacPhees say thousands of families are fed through the food distribution portion of the center each week. Another event is a free Friday night dinner at 6:30 p.m. followed by a worship service in a totally renovated portion of the large building called the Upper Room. This began primarily for pastors and laypeople of areas churches to come and be loved and recharged for their own Sunday morning service at their respective church. It has quickly blossomed into a place for everyone, with a laid back style of worship with round tables. It is for people who need love and others who give it.

The latest phase of the ministry is another portion of the building that has been transformed into a place where many teens and others gather. Uniquely designed by the MacPhees, the UR Café is finished out in barn siding that brings the outdoors inside and gives a warm glow of simplistic living to the area that has homemade tables, comfortable couch and chairs, and stools – your choice of seating.

UR (Upper Room) Café is an early morning place to grab a coffee or tea with a multitude of flavors and a fresh donut from Schmidt’s Bakery in Batesville, who delivers donuts daily.

Students come sometimes in the morning before school and again after school. It’s a safe place where they hang out, do homework, or play life sized games and board games, but no electronics. Charlotte said, “We just want to give them a break from electronic devices.” It works. Kids come there and don’t seem to mind.

The place is inclusive of families, groups, and whoever wants to find a place to enjoy the company of others, or just find a place of solitude. Ken and Charlotte are always willing to listen and pray with those who feel a prayer is needed. They run the not-for-profit café for the love of Christ and “just to make a difference in people’s lives,” they agreed.

“This is not a church,” the MacPhees emphasized. It’s a come as you are, non-denominational ministry that is fully funded through donations and volunteers. They have been able to give out 30 pallets of blankets to the homeless from Seymour to the Cincinnati bridges, according to Ken. They also gave out around 2000 heaters to families in need in the Osgood area this year alone.

The MacPhees desire that we all become the hands and feet of Christ to offer a helping hand to those in need. “We want to be a part of giving people hope,” they concluded.

Check out this ministry where you will be greeted with enthusiasm and possibly handed a card that reads “UR Not Invisible, UR Courageous, or UR Beautiful, all designed with the café logo. Each one has a distinct message of hope.