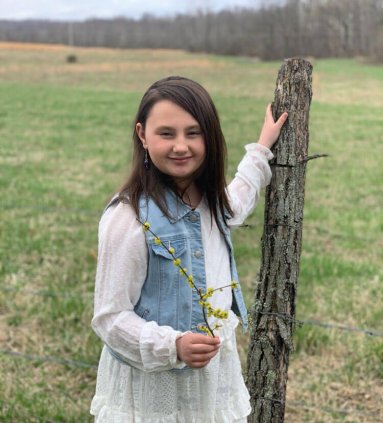 Some people leave a living legacy that touches lives far beyond their time on earth. Two women, completely different, and yet alike in the world of one little girl, have done just that. To keep their memory alive, and to help others along the way, Ashlyn DeWire, 9, of Versailles has taken on a project to honor and memorialize Patsy Holdsworth, a neighbor and friend, and Oretta Ramey, her great grandmother.

The fourth grader at South Ripley, decided to have a rummage sale as a way to make money to donate to Our Hospice of South Central Indiana. Her mother, Eileen, is a hospice nurse through that agency.

Feeling the importance of having that type of care, Ashlyn told The Versailles Republican, “I thought it would be good to give it (money earned) to people who can’t really pay”. She went on to say, “You know, the money would be there in case they need it.” She was referring to anyone who needs the care of a hospice nurse. She still checks on Mr. Holdsworth to make sure he’s doing okay after losing his wife this summer and wants to “just do something” to make it better. She said her great grandmother was 85 and lived in Waldron before she passed away recently, “so we didn’t get to see her a lot, but when we did…she gave us all hugs.” She said that her great grandmother had “bunches and bunches” of kids.

From just knowing these ladies, Ashlyn, decided that she would take on the challenge of putting together a fundraiser. With the help of her mother and many who have given donations, there is sure to be something for everyone at the two-day event, set for August 24 from 9:00 a.m. -? at Ashly Designs, 812 Warpath Drive in Milan and again on August 25 from 9:00 a.m.-? at Ernies Pizza, 508 S. Adams St., Versailles.

“We have a trailer full of items donated,” noted Eileen. That was from just one place. She said Ashlyn has been involved in every aspect, carrying the items and organizing them to get ready for the big days ahead. They have name brand clothes, shoes, toys, home décor, electronics, purses, backpacks, books, furniture work-out equipment and so much more. Some of the items will be priced, but mostly they are accepting free will donations.

All of the money raised will be given to Our Hospice of South Central Indiana. A memorial stone will be placed in a garden there with Patsy and Oretta’s names on them.

Ashlyn is like most children her age when it comes to sports. She loves swimming on the Milan Aquatic Team. She also loves the fine arts, with music being her favorite. But, most of all, she has a kind heart and is always thinking of others. Her mother described her as “an old soul who is so very caring”.

It’s just her DNA. Ashlyn told The Versailles Republican that she has other aspirations of getting some fundraising going to help some children go to Disney World before their time on earth is done. She is matter of fact about the subject and wants to do something now, rather than later. Her kindness radiates throughout the community she lives in and now will put a forever legacy in stone for two wonderful ladies. It’s just the beginning.

Ashlyn lives with her mom and dad, Jeremiah, in a home that Mr. and Mrs. Holdsworth previously owned in Versailles. She also has two younger siblings. Most days she is doing what fourth graders do, but on other days she’s just popping over to see if Mr. Holdsworth needs anything. She said she is always thinking…thinking about ways she can help others.