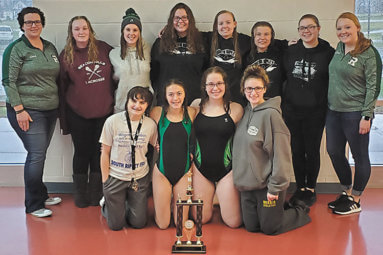 Local swim teams traveled to Switzerland County for the annual Ohio River Valley Conference meet on Saturday, January 18, where the South Ripley Lady Raiders and the Milan Indians were crowned team champions in the girls and boys divisions.

South Ripley head coach Stacy Eaglin wrote, “I am super proud of these ladies. They have worked very hard for this!”

The Milan Indians earned conference championship honors in the boys portion of the meet with a team-high total of 345. The Indians were followed by Switzerland County with 229, Southwestern with 135, and Shawe with 23.

The second place girls team from Milan also had several strong performances at the meet.

Ariel Haessig won the 200 medley, Sophie Thomas won the 100 backstroke, and Taylor Williamson won the 100 breaststroke. The relay team of Thomas, Williamson, Hailey Smith, and Mackinze Deffinger also won the 200 medley. Ariel Haessig continued her record-breaking season by resetting her school’s 100 butterfly record at in a time of 1:06.97. The previous record was set in 1991.