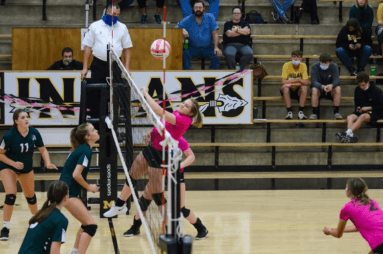 South Ripley maintained its pursuit of a second place finish in the Ohio River Valley Conference and picked up a 3-0 win at Milan on Monday night in the Lady Indians’ annual Pink Out for the Cure match.

While the Lady Indians continue to deal with a depleted roster, South Ripley took advantage and came out swinging in the first set to the tune of a 25-17 win. The Lady Raiders followed with a 25-16 victory in set two and finished the sweep with a 25-18 score in the third set.

South Ripley (7-11, 2-1 ORVC) hosted Jac-Cen-Del in an ORVC rivalry match on Wednesday and hosts Hauser in non-conference action on Thursday. The Lady Raiders currently sit a half-game back of Southwestern (Hanover) for second place in the conference standings. Rising Sun clinched the ORVC title on Monday night, defeating Shawe 3-0 to go a perfect 6-0 in the conference.

Milan (5-11, 2-3 ORVC) fell 3-0 at Lawrenceburg on Wednesday and visits Switzerland County on Monday in an ORVC match. The Lady Indians entered Wednesday in a tie for fourth place in the ORVC with Jac-Cen-Del.