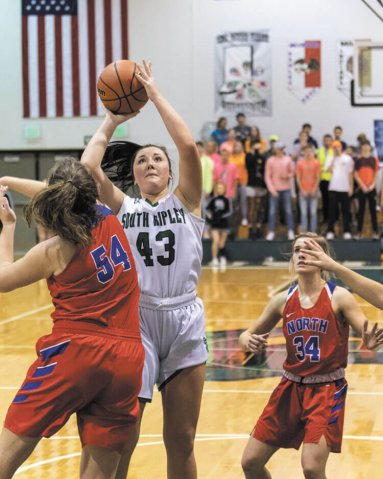 
SR senior Cierra Copeland scored all 12 of her points in the second half to help lift her team to victory over North Decatur. Copeland was a reliable ball handler for her team through two challenging overtime periods.

The South Ripley Lady Raiders varsity basketball team persisted through two overtime periods to defeat the North Decatur Lady Chargers in Versailles on Tuesday, December 3 by a score of 47-45.

It was South Ripley’s second win of the season, improving their record to 2-5, whereas North Decatur fell to 3-5 on the season.

The Lady Raiders began the game in front as senior Lindsey Meyer hit nothing but net from beyond the three point line immediately following the opening tip. Sophomore Gracie Gunter would go on to score seven first quarter points, including one three-pointer, to help boost her team to a 14-7 lead after the first eight minutes.

South Ripley’s momentum stalled in the final minutes of the first quarter and throughout the second however. After trailing 14-5, North Decatur forced several turnovers thanks to a full court press and went on a methodical 15-0 scoring run.

SR’s Gunter finally broke the drought with two free throws with 41 seconds remaining in the half. The game went to break at 20-16 in favor of the Lady Chargers, who outscored SR 13-2 in the quarter.

The home team looked rejuvenated after the break and scored the first four points of the second half to tie the game at 20.

With the game tied at 23, SR’s LJ McQueen grabbed an offensive rebound from a missed free throw and put the ball back up for two points. Then, she was fouled while taking a half court shot to end the quarter. Hitting two of three free throws gave the Lady Raiders a three point lead going into the final quarter at 27-24. SR outscored ND 11-4 on the quarter.

SR’s Cierra Copeland opened the fourth quarter with two field goals in a row, but with a three-pointer near the midpoint, the Lady Chargers pulled back within three points.

The full court defense that proved successful for ND in the second quarter was again employed by the visitors, causing ball control troubles for the Lady Raiders and allowing ND to retake the lead.

SR briefly regained the lead with 1:19 remaining thanks to two free throws by McQueen, but a lay-in by ND with 23 seconds left tied the game again at 34 all. That score carried through the final seconds, forcing overtime.

The extra period saw both teams trading scores, but with under a minute remaining, the Lady Chargers held a 42-39 lead. As the seconds dwindled, SR junior Leire Gonzalez hit a stunning three pointer to tie the game and force a second overtime with the score knotted at 42.

Nearly two minutes ticked off the clock before either team scored in the second OT. A smooth back door pass from Rachel Meyer to Lindsey Meyer for a layup broke the stalemate and gave SR the lead.

The elder Meyer went on two hit two clutch free throws on the next possession, effectively sealing the win for her team. The buzzer rang after the 40-minute affair with SR up by two, 47-45.

Copeland and Gunter led the team with 12 points each. Also scoring for the Lady Raiders: McQueen eight, L. Meyer six, Gonzalez five, and R. Meyer four. As a team, SR went 9/18 from the free throw line compared to 8/15 for ND.

Prior to the varsity match, the reserve Lady Raiders also enjoyed a victory over North Decatur, snapping a two game losing streak by a score of 36-27.

The younger Lady Raiders started out strong, scoring 14 first quarter points to go ahead by eight after the first, 14-6.

Similar to the varsity match, ND fought back, holding the home team scoreless in the second while decreasing the lead to five at 14-9.

A 14 point rally in the third quarter lifted the Lady Raiders to a 28-19 lead. Late in the final period, Mya McNew, Katelynn Samples, and Brionna Linkel all hit big free throws to hold off the Lady Chargers and secure the win.

Linkel led the reserve squad in scoring with 10 points to go along with five rebounds. Sarah Meyer added nine points and seven steals. Lexi Mozingo scored six while pulling down a team high 10 rebounds, and Samples scored five and had five rebounds.

The JV Lady Raiders improved to 3-4 with the win. South Ripley will host Rising Sun on Friday, December 6 for their next match. The JV is set to tip-off at 6:00 p.m. The varsity Lady Shiners have yet to earn a win and currently sit at 0-5 on the season.