Large crowd gathers at annual water board meeting after dispute 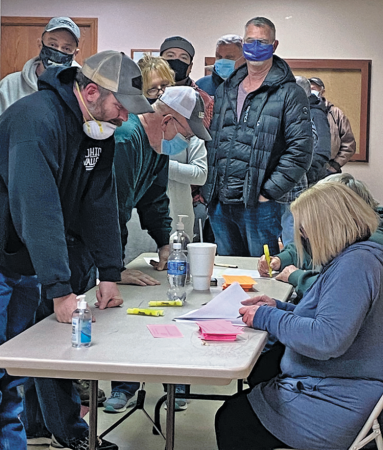 
The large crowd that attended the Holton Board Corp. annual meeting Monday night was reflected before the meeting began at 7 p.m in the foyer of the Holton Community Building as members gathered to vote.

A crowd of over 100 gathered at the Holton Water Corporation’s annual meeting on Monday night, March 1, at the Holton Community Center. Some of those attending had to park at the Holton Christian Church, quite a ways from the center.

The water membership was prompted to attend the meeting after suggestions had been made that the present water board might not quite be handling business as usual. This was not the case as the evening unfolded and their attorney, Neil Comer, explained how the water board was set up years ago. There was also a suggestion that the board could be spending money more lavishly than they should on their employees, with everyone having an outstanding retirement plan. That was not the case either as John Meisberger, president of the board, read the financial statement, and discussion followed on how much everyone was paid and why it was set up the way it is.

Marilyn Kirk, a former employee who had been fired, had brought information to the newspaper saying she felt decisions were being taken away from the members when it came to voting for the board members. (See article in Feb. 18 Versailles Republican). This was when a copy of proposed by-laws were handed out and shouldn’t have been. Attorney Comer explained that the copies were for board members only until they discussed them, and eventually accepted, amended, or rejected the proposed copies. “Those weren’t signed, they weren’t approved,” he noted at the meeting, adding that this is the way boards conduct business and have done so for years.

At the meeting, the members were all provided a ballot to vote for one seat. As there were two seats available, the question came up, why couldn’t members vote for two? The attorney explained that was the way the by-laws were set up back in 1976. This led him to the second vote on the ballot, which was whether to let the board amend the present by-laws to reflect 2021. The membership overwhelmingly voted to have the by-laws amended by the board of directors with a vote of 94-yes, and 18-no.

Any member could have put their name on the ballot, but only two did so besides the two who were already on the board and up for re-election. Those who added their names for the first time were Marilyn Kirk and Randy Sizemore. Kirk garnered 10 votes and Sizemore had 6. The present board members up for re-election were Cynthia Melton, who got 44 votes and Marlin Hughes, who brought the most votes of the evening at 60. There were two spoiled ballots, meaning two people marked more than they could vote for.

The discussion became lively at times as some of Kirk’s relatives took the stand to voice their opinions about the present water board. Before the meeting, some of the same people had campaigned against the present board members, going door-to-door in the community. Accusations flew through the air, but in the end, the vote had the final say and the board remained intact. Besides Meisberger, Melton and Hughes, they include: Darla Downey, Andy Comer, Jim McNeelan, and Mike Stratton.

With around 950 members to service with 140-150 miles of water pipeline to maintain, the board members assured the public they are spending the money as frugally as possible to keep the water at a low rate for the customers. They do have a retirement plan that pays above what most places pay, but noted they feel to keep good, key, employees that is what they have in place.

If you’re interested in what is going on at the Holton Water Corp., the meetings are held monthly at the water company’s office on North Michigan Road by the Holton Water Tower just off US 50 and Michigan. They meet the first Monday of each month at 7 p.m. “All of our meetings are open to the public,” Meisberger told The Versailles Republican.
Editor’s Note: The meetings are usually held at the water corporation building, but this one had to be moved due to the anticipated crowd and COVID-19 restrictions.